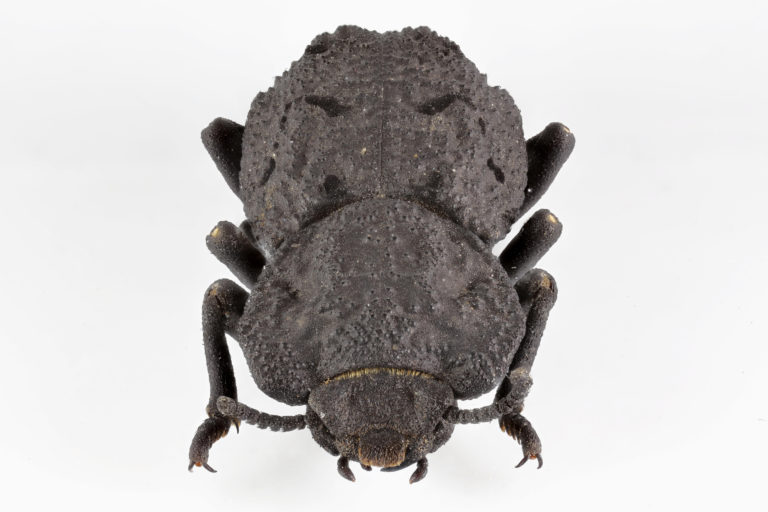 Oct. 21, 2020 -  With one of the more awe-inspiring names in the animal kingdom, the diabolical ironclad beetle is one formidable insect. Birds, lizards and rodents frequently try to make a meal of it but seldom succeed. Run over it with a car, and the critter lives on.

The beetle’s survival depends on two key factors: its ability to convincingly play dead and an exoskeleton that’s one of the toughest, most crush-resistant structures known to exist in the biological world. In a paper published today in Nature, researchers at the University of California, Irvine and other institutions reveal the material components – and their nano- and microscale blueprints – that make the organism so indestructible, while also demonstrating how engineers can benefit from these designs.

“The ironclad is a terrestrial beetle, so it’s not lightweight and fast but built more like a little tank,” said principal investigator and corresponding author David Kisailus, UCI professor of materials science & engineering. “That’s its adaptation: It can’t fly away, so it just stays put and lets its specially designed armor take the abuse until the predator gives up.”

In its desert habitat in the U.S. Southwest, the beetle can be found under rocks and in trees, squeezed between the bark and the trunk – another reason it needs to have a durable exterior.

Lead author Jesus Rivera, a graduate student in Kisailus’ lab during the project who has since earned his Ph.D., first learned of these organisms in 2015 during a visit to the renowned entomology museum at UC Riverside, where he and Kisailus were working at the time. Rivera collected the beetles from sites around the Inland Empire campus and brought them back to Kisailus’ lab to perform compression tests, comparing the results to those of other species native to Southern California. They found that the diabolical ironclad beetle can withstand a force of about 39,000 times its body weight. A 200-pound man would have to endure the crushing weight of 7.8 million pounds to equal this feat.

Conducting a series of high-resolution microscopic and spectroscopic evaluations, Rivera and Kisailus learned that the bug’s secret lies in the material makeup and architecture of its exoskeleton, specifically, its elytra. In aerial beetles, elytra are the forewing blades that open and close to safeguard the flight wings from bacteria, desiccation and other sources of harm. The ironclad’s elytra have evolved to become a solid, protective shield.

Analysis by Kisailus and Rivera showed that the elytra consists of layers of chitin, a fibrous material, and a protein matrix. In collaboration with a group led by Atsushi Arakaki and his graduate student Satoshi Murata, both from the Tokyo University of Agriculture and Technology, they examined the chemical composition of the exoskeleton of a lighter flying beetle and compared it to that of their earthbound subject. The diabolical ironclad beetle’s outer layer has a significantly higher concentration of protein – about 10 percent more by weight­­ – which the researchers suggest contributes to the enhanced toughness of the elytra. 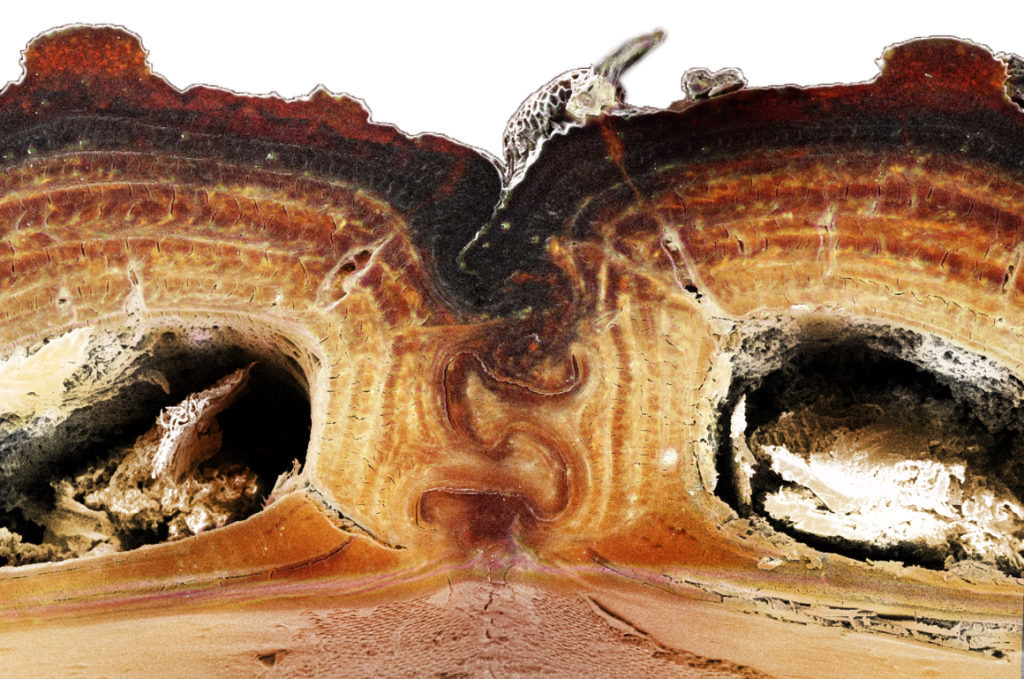 The team also investigated the geometry of the medial suture joining the two parts of the elytra together and found that it looks very much like interlocking pieces of a jigsaw puzzle. Rivera built a device inside an electron microscope to observe how these connections perform under compression, similar to how they might respond in nature. The results of his experiment revealed that, rather than snapping at the “neck” region of these interlocks, the microstructure within the elytra blades gives way via delamination, or layered fracturing.

“When you break a puzzle piece, you expect it to separate at the neck, the thinnest part,” Kisailus said. “But we don’t see that sort of catastrophic split with this species of beetle. Instead, it delaminates, providing for a more graceful failure of the structure.”

Further microscopic examination by Rivera disclosed that the outside surfaces of these blades feature arrays of rodlike elements called microtrichia that the scientists believe act as frictional pads, providing resistance to slippage.

Kisailus sent Rivera to work with Dula Parkinson and Harold Barnard at the Advanced Light Source at Lawrence Berkeley National Laboratory, where they performed high-resolution experiments to pinpoint the changes within the structures in real time using extremely powerful X-rays.

The results confirmed that during compression, the suture – rather than breaking at the thinnest point – slowly delaminates without catastrophic failure. They also validated that the geometry, the material components and their assembly are critical in making the beetle’s exoskeleton so tough and robust.

To further substantiate their experimental observations, Rivera and co-authors Maryam Hosseini and David Restrepo – both from Pablo Zavattieri’s lab at Purdue University – employed 3D printing techniques to create their own structures of the same design. They ran tests revealing that the arrangement provides the maximum amount of strength and durability. The Purdue team’s models showed that not only does the geometry enable a stronger interlock, but the lamination provides a more reliable interface.

Kisailus said he sees great promise in the ironclad beetle’s exoskeleton and other biological systems for new substances to benefit humanity. His lab has been making advanced, fiber-reinforced composite materials based on these characteristics, and he envisions the development of novel ways to fuse aircraft segments together without the use of traditional rivets and fasteners, which each represent a stress point in the structure.

His team, including UC Riverside undergraduate Drago Vasile, mimicked the elliptical, interlocking pieces of the diabolical ironclad beetle’s exoskeleton with carbon fiber-reinforced plastics. They joined their biomimetic composite to an aluminum coupling and conducted mechanical testing to determine if there were any advantages versus standard aerospace fasteners in binding dissimilar materials. Sure enough, the scientists found that the beetle-inspired structure was both stronger and tougher than current engineering fasteners.

“This study really bridges the fields of biology, physics, mechanics and materials science toward engineering applications, which you don’t typically see in research,” Kisailus said. “Luckily, this program, which is sponsored by the Air Force, really enables us to form these multidisciplinary teams that helped connect the dots to lead to this significant discovery.”

The project – which received support from the U.S. Air Force Office of Scientific Research, the U.S. Army Research Office, the U.S. Department of Energy and the Tokyo University of Agriculture and Technology’s Institute of Global Innovation Research – also included researchers from the University of Texas at San Antonio.