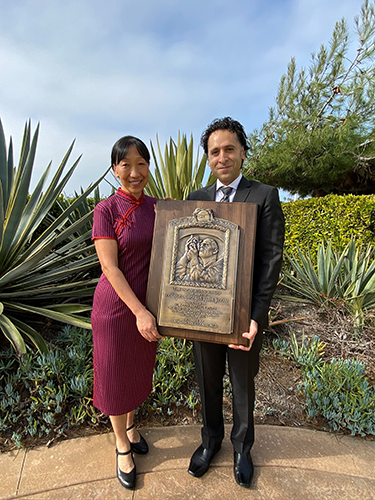 Jan. 30, 2020 - The Institute of Navigation (ION) honored the Samueli School’s Zak Kassas last week with its Colonel Thomas L. Thurlow Award for outstanding contributions to the science of navigation. Kassas, assistant professor of mechanical & aerospace engineering and electrical engineering & computer science, was recognized for foundational work in the theory and practice of exploiting signals of opportunity for accurate and reliable positioning, navigation and timing.

Kassas specializes in analyzing these signals of opportunity – existing radio signals from cell towers, Wi-Fi and low-Earth-orbit satellites – to map, position and navigate vehicles and people with high accuracy, without relying on GPS signals.

His end-to-end research spans theoretical modeling and analysis of signals of opportunity, designing specialized cognitive software-defined radios and practical navigation algorithms, and finally testing the system on unmanned aerial vehicles (UAVs), ground vehicles, and handheld devices. Kassas and his team demonstrated the efficacy of their system showing UAVs navigating at an unprecedented sub-meter-level accuracy exclusively with ambient cellular communications signals. In addition, they are the first to develop a simultaneous tracking and navigation (STAN) framework to exploit low Earth orbit (LEO) satellite signals, and demonstrated UAVs and ground vehicles navigating with this framework

The ION lauded him for “convincingly demonstrating” that positioning, navigation and timing via signals of opportunity is “eminently practical and accurate” for UAVs, ground vehicles and pedestrians in indoor environments.

The award is named for U.S. Army Air Corps Colonel Thomas L. Thurlow, an engineer and pilot who contributed significantly to the development and testing of navigation equipment and the training of navigators and pilots. Previous winners include Brad Parkinson, known as “the father of GPS”; Marco Falcone, who headed the effort to develop Galileo, the European Navigation Satellite System; and several National Academy of Engineering members.

“I am honored to receive the prestigious ION Colonel Thurlow Award. It is humbling to be in the company of pioneers who have received such recognition,” said Kassas, who accepted the award at the ION International Technical Meeting Jan. 24, in San Diego.

“This award has often been given much later in one's career,” noted Jade Morton, president of the ION, in the awards ceremony.

The ION is an international professional organization dedicated to advancing positioning, navigation and timing.