The Power of Partnership

UCI trustee, professor work together to promote diversity in engineering 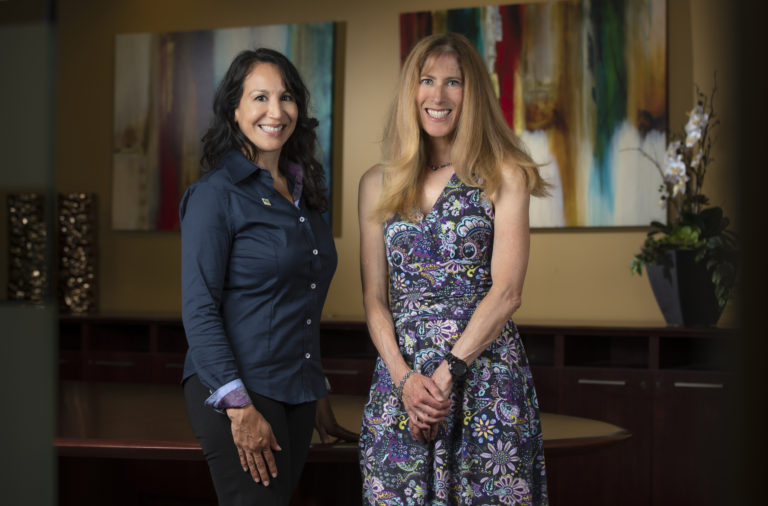 September 16, 2019 - Inspired by her experiences as an engineering student and young professional, Regina Ragan, UCI professor of materials science & engineering and chemical & biomolecular engineering, sought to promote diversity in The Henry Samueli School of Engineering through a partnership with Stacey Nicholas, a UCI Foundation trustee.

An engineer herself (with a master’s and bachelor’s degree in electrical engineering from UCLA), Nicholas shares Ragan’s passion for diversity issues. In 2014, she established the Stacey Nicholas Endowed Chair for Diversity in Engineering Education – which Ragan holds – to encourage the hiring and retention of women and minorities in engineering at UCI.

The chair has allowed Ragan and Nicholas to create support and mentorships that are so critical to success in college and career. For the past four years, Ragan has devised programs linking underrepresented undergraduates with graduate students, faculty and industry professionals. She also counsels graduate students and faculty on the importance of student diversity and confronting implicit biases – which can inhibit the success of minority groups.

“It has never been more important to empower women and students from disadvantaged backgrounds to become the engineers of the future,” Nicholas says. “Equally important is a commitment to a diverse faculty that brings unique perspectives and can serve as role models for students.”

She has built a pipeline for talented, underrepresented students to learn basic engineering concepts by funding UCI programs. In 2014, Nicholas gave $9.5 million to the engineering school; $5 million of that supports the Academic Innovation & Research in Engineering endeavor, which conducts K-12 and community college outreach and promotes interest in STEM subjects through project-based learning.

But getting students and keeping them are two different things, and the retention of women in her classes has been a challenge for Ragan. She believes the remedy lies in educating others about the implicit biases that females in engineering often face and pioneering programs to counteract those biases while increasing internship and job offers.

“It’s shocking that people are so unaware that these problems persist, although usually their lack of awareness isn’t on purpose,” says Ragan, who’s affiliated with the Office of Access & Inclusion within The Henry Samueli School of Engineering and the Donald Bren School of Information & Computer Sciences. “More education will force them to realize how deeply these biases are internalized within our society.”

Another key to retention is mentorship. “Women don’t see other women in engineering roles; they mostly see men, so it discourages them. Having underrepresented professionals work with underrepresented students allows them to see themselves in this field despite encountering implicit biases,” Ragan says.

She has mentored many students herself over the years, and her efforts have paid off. Mentee Melissa Thone, a graduate student researcher for Ragan, has received grants from the National Science Foundation and last year was awarded a $12,000 UCI Public Impact Distinguished Fellowship for her promising work on cancer treatments.

“Dr. Ragan helped me create successful funding applications that have pushed my career forward,” Thone says. “She helped me feel accepted in higher education – something that’s not always easy as a woman in engineering – and also helped me shape my future career. Having a female mentor in engineering who’s always accessible has been really encouraging.”

Chloe Groome, another graduate student Ragan took under her wing, now mentors two female undergraduates herself. She says she strives to emulate Ragan both academically and personally.

“She’s so calm; she’s good at making me feel comfortable contributing ideas, and I’ve tried to instill that in my mentees. When you’re the only woman in the room, there’s this pressure to be right, because if you’re wrong, women are wrong. The more of us there are in the room, the more you feel safe to participate,” Groome says. “When you don’t have an example, you can feel all alone and lost. Once you have a female role model, it’s like a chain reaction.”