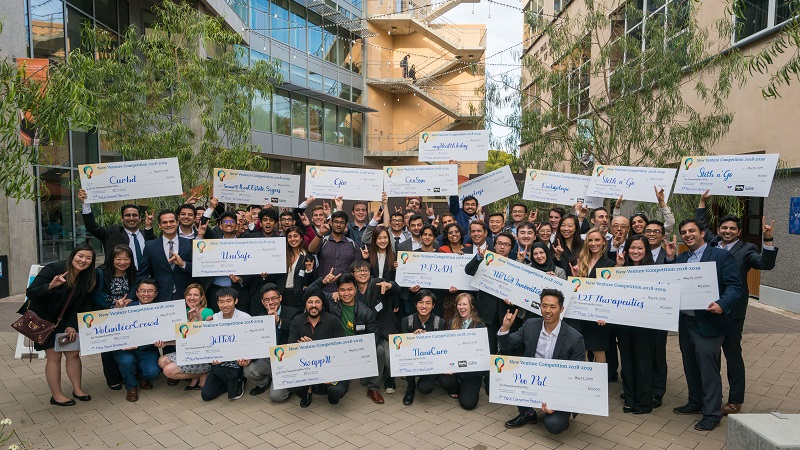 July 12, 2019 – Fifty-four teams competed in the final round of the 2019 New Venture Competition, held in May at UC Irvine’s Paul Merage School of Business and hosted by the Beall Center for Innovation and Entrepreneurship. The five-month process culminated in an evening reception and awards ceremony, during which competition sponsors presented prizes to the first-through-third place winners in seven categories.

A panel of professionals made up of experienced investors, entrepreneurs and senior business practitioners familiar with early-stage companies judged the semifinalist teams and evaluated them based on the strength of their plans and overall presentations. The judges considered specific criteria when evaluating concept papers and pitch decks, however, they chose the winning teams based on which ones the judges would most likely invest their own money in. Sixteen teams walked away with cash and prizes valued at over $100,000; six of the winning teams included engineering students.

The winning teams that counted Anteater engineers as members include:

UniSafe, which earned first place in the Business Products & Services category ($10,000). UniSafe is a campus safety app that includes an on-campus escort button and a location-sharing feature. The app uses the whereabouts of registered sex offenders and risky locations to provide students alerts when danger is nearby, directions, and updates to parents and close friends.

Embryologic, which took home awards in two categories. The team earned second place in Life Sciences ($5,000), and second place in the Win the Future Award category ($3,000). Embryologic is a noninvasive imaging device that can assess the quality of an embryo for in vitro fertilization.

P-FLAPs, which won the second-place prize in the Tech Surge category ($5,000) for its small, light-projection surgical device. P-FLAPS will allow surgeons to choose and place a stencil on a patient through a projection controlled by an app.

CenSyn, an ultra-portable pocket-sized EEG pen capable of extremely fast recording and displaying of brain activity. CenSyn earned first place in the Win the Future Award category ($4,000) for its device, which records in under two minutes with clinical grade accuracy and precision.

NOWA Innovations, which earned second place in the Win the Future Award ($3,000) with its noninvasive IoT device that optimizes the treatment of asthma and COPD. The device monitors consumption of inhaled medicine in real time, allowing physicians to customize treatment and preventing patients from overdosing and under-dosing their medications.

NanoCurv, a device that promotes better patient outcomes for corneal blindness. The instrument received third place in the Win the Future Award category ($1,000) by working to encourage healthy cell growth and killing infections, bacteria and fungus.

In an effort to provide even more opportunity for UCI students, the Beall Center partnered with International Elites in Suzhou to permit winners of the Win the Future Award to travel to Suzhou, China, and compete in the final round of its “Win the Future” New Venture competition.