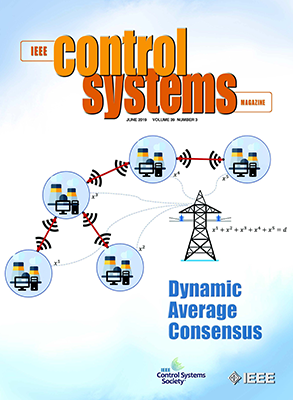 July 10, 2019 - Solmaz Kia, assistant professor of mechanical and aerospace engineering, had a paper published recently in the IEEE Control Systems Magazine that was chosen to appear on the publication’s cover as well.

The paper, Tutorial on Dynamic Average Consensus: The Problem, its Applications and the Algorithms, addresses a system used in distributive computing to average sets of time-varying signals. This is important in many network applications that rely on ongoing time-stamped signals, like distributed energy systems or sensor sampling, for example. Solving this problem is challenging because local interactions among networks involve only partial information, and the quantity that the network seeks to compute is constantly changing as the local computers run their routines.

The article addresses the dynamic average consensus problem and the distributed coordination algorithms available to solve it. It was written in the form of a tutorial, says Kia, the lead author, because while there are many published papers that address these problems, there was not a reference that presented recent developments in a unified way. The authors use the tutorial format to introduce the main ideas behind dynamic average consensus algorithms, the performance tradeoffs considered in their design and the requirements needed for analysis and convergence guarantees. Their overall emphasis is on the value and utility of the algorithms and results. The article includes an extensive reading list, a detailed discussion of open questions and avenues for further research.

“Average consensus algorithms play an essential role in developing distributed solutions for many important multi-agent problems in distributed optimization for the best in-network decision-making, formation control for multi-agent robots and data fusion in sensor networks,” said Kia, whose work is supported by the National Science Foundation.