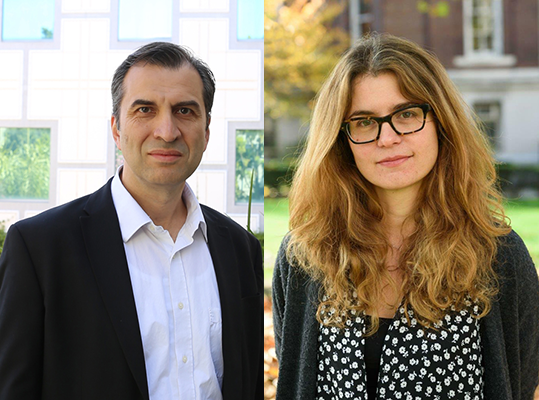 June 10, 2019 - Two Samueli School departments will have new leaders on July 1. Zoran Nenadic will take the reins as chair of the Department of Biomedical Engineering, while Athina Markopoulou will become chair of the Department of Electrical Engineering and Computer Science, the school’s largest department. In each case, the chair is responsible for managing the department’s teaching, research and outreach efforts.

Nenadic replaces outgoing chair Abe Lee, the William J. Link Professor. Lee, a National Academy of Inventors Fellow and editor of Lab on a Chip journal, held the chair post for nine years, making him the longest-serving senior administrator in the Samueli School.

After earning his doctorate in systems science and mathematics from Washington University in St. Louis, Nenadic was a postdoctoral researcher at California Institute of Technology before joining UCI in 2005 as an assistant professor. During his UCI tenure, he has fulfilled a number of administrative roles, including the lead faculty member overseeing the department’s ABET (Accreditation Board for Engineering and Technology) accreditation and the BME associate chair for graduate affairs. He also served as a representative in the UCI Divisional Senate Assembly and on the Laboratory Safety Committee.

His research focuses on neuroengineering, specifically the development of technologies to restore or rehabilitate functions lost due to neurological conditions, such as stroke or spinal cord injury.

Nenadic has received several research awards, including the NSF Faculty Early Career Development (CAREER) Award and the Hiruma-Wagner Award from the Japanese Research Foundation for Opto-Science and Technology. Numerous media outlets, including Time Magazine, Reuters, Fox Business and The Doctors have featured his research accomplishments. For his teaching efforts, Nenadic received multiple BME Professor of the Year distinctions from the Engineering Student Council.

“I am very excited at the prospect of taking over the reins of the BME Department,” Nenadic said. He credits his predecessor, Lee, for skillful leadership and for significant faculty growth, adding, “As we are poised to continue the growth trajectory, I am looking forward to BME@UCI attracting talents who will enrich our collective research portfolio and bring exciting and diverse research ideas with unique perspectives and backgrounds. This will propel our unit to the ranks of large biomedical/bioengineering departments nationwide and one of the largest departments in the Henry Samueli School of Engineering.”

This anticipated growth in personnel will present novel challenges, Nenadic continued, but also tremendous opportunities. “By working with our faculty, staff, students and administration, it is my goal to harness these opportunities for the betterment of our department, our school, our campus and ultimately our community.”

Markopoulou succeeds Kumar Wickramasinghe, who served as chair for five years. Wickramasinghe, the Nicolaos G. and Sue Curtis Alexopoulos Presidential Chair, is a National Academy of Inventors Fellow and will be inducted this summer into the Royal Society of London for Improving Natural Knowledge.

Markopoulou joined UCI in 2006. A professor and current UCI Chancellor’s Fellow, she has served as director of the Networked Systems graduate program – successfully overseeing academic and administrative review of the program – and as a representative in the Academic Senate Assembly and as a member of the Samueli School executive committee. She earned her master’s and doctoral degrees in electrical engineering from Stanford University; her research encompasses computer networks, including mobile systems; and network security, privacy, coding and measurement.

Markopoulou has received the NSF CAREER Award, the Samueli School Faculty Midcareer Award for Research and the OCEC's Educator Award. She was an associate editor for IEEE/ACM Transactions on Networking and ACM CCR, and also chaired or co-chaired several research conferences.

"This is an honor and a responsibility,” Markopoulou said of her new position. “I am looking forward to working closely with everyone, in our department and in the school, to take EECS to the next level."