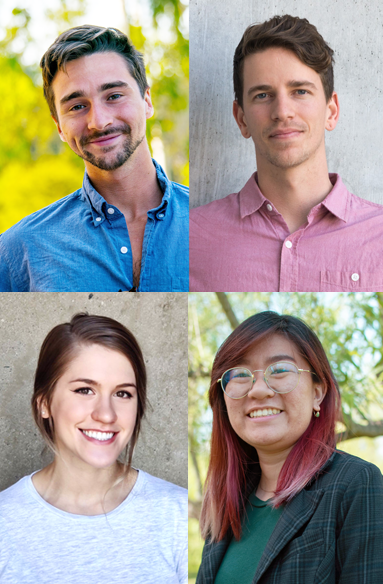 June 13, 2019 - Four engineering students have received Graduate Research Fellowship Program (GRFP) awards from the National Science Foundation. The GRFP is a competitive program that recognizes and supports outstanding students who are pursuing research-based graduate degrees in science and engineering.

The engineering students -- Andrew Rowley, Bryce Wilson, Courtney Kay Carlson and Kimmai Phan -- are among 24 from UCI who will receive three years of annual funding.

Andrew Rowley is designing an anti-inflammatory immunotherapy using biomaterials derived from human collagen. He looks at the anti-inflammatory properties of these materials and the kinetics of delivery with the aim of developing therapies for various inflammatory diseases. “When I found out I won the award I was so proud and incredibly honored to know that my research could facilitate this sort of interest and impact,” he said. Rowley is working toward a doctorate in chemical engineering, and his advisers are Professor Szu Wang and Associate Professor Wendy Liu.

Bryce Wilson is earning a doctorate in the Department of Chemical and Biomolecular Engineering under the guidance of his advisers Vasan Venugopalan, a professor and department chair; and biomedical engineering professor Elliot Botvinick. Wilson is working on expanding existing optical probe techniques into 3D microenvironments. He aims to develop an optical platform for imaging and perturbing biological environments to explore the connection between physical forces and biological signals.

“This is an exciting new frontier of biology that has possible therapeutic consequences for multiple disease models including cancer,” said Wilson.

Carlson, who is earning a doctorate in biomedical engineering, said she felt extremely honored and lucky to receive this fellowship. Her research is to engineer mammalian cells that will be able to “remember” their own history as they proliferate within living tissue. At a predictable site within the cells' genome, lineage relationships are recorded as mutations in the DNA.  Additionally, the cells will be able to record whether they have been exposed to a variety of microenvironmental conditions, such as low oxygen or other chemical signals.

“There are many exciting applications for these engineered cells,” said Carlson, who is advised by Assistant Professor Chang Liu. “For example, they could benefit developmental biologists trying to answer important questions about how complex multicellular organisms develop from a single-celled zygote. They could also be useful for clinically inspired studies trying to uncover the causes of developmental disorders or cancer progression.”

Kimmai Phan will graduate this month with a bachelor’s degree in biomedical engineering and a minor in materials science and engineering. She works in the lab of her adviser, Assistant Professor Tim Downing.  Her current project, in collaboration with the lab of Associate Professor Anna Grosberg, seeks to determine whether DNA methylation, an important epigenetic mechanism, plays a role in the topography-mediated maturity of cardiac muscle cells. If so, she will identify key mechanisms and genes that may be instrumental in cardiac muscle cell maturity.

“Being the daughter of parents with chronic diseases, I've always been interested in the intersection of medicine and engineering therapies to combat illnesses,” said Phan. “Understanding fundamentally how tissues and disease function at the gene expression level is so powerful as a tool to improve patient care and medicine.”

Phan plans to pursue her doctorate in the biomedical engineering joint program between Georgia Tech and Emory University. She attributes much of her success to being part of the UC LEADS (UC Leadership Excellence through Advanced DegreeS) program, which supports first-generation students in their pursuit of graduate degrees.