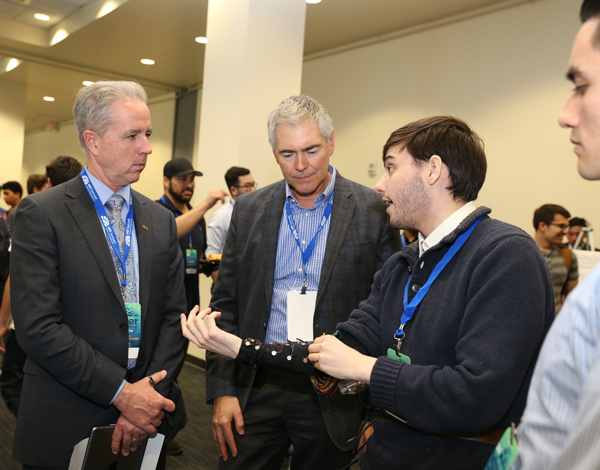 April 16, 2019 - Engineering seniors presented more than 140 design projects at the 2019 Winter Design Review in March at the UCI Student Center. The senior design program provides engineering students with hands-on learning experience and professional development through innovative projects that bridge academic fundamentals with real world challenges. After working on their projects for two quarters, students were able to present their ideas by displaying or demonstrating them to a wider audience at Winter Design Review.

The day began with a breakfast for industry reviewers and faculty, hosted by Samueli School Assistant Dean Ken Walsh. Walsh delivered an update on the school’s progress in meeting its strategic plan goals and thanked the event’s signature sponsor, Thales, for its participation. He encouraged reviewers to see as many projects as possible.  “When talking to our students, ask hard questions and challenge them,” said Walsh, “but also, have fun.”

Some teams made presentations to a panel of reviewers in the smaller breakout rooms, and others explained their projects to the faculty, staff and industry representatives who walked through the Pacific Ballroom, which was overflowing. Eleven teams (see below) won Dean’s Choice Awards.

Fred Schreiner, Thales CTO, was impressed by the advances in machine learning and AI being used in different ways and the strong vision for helping disabled people. “I am blown away. It is so inspiring to see the creative minds, the teamwork, collaboration and good articulation of value,” said Schreiner. “Honestly, this is my first time here and many of these projects moved me; they’re just awesome.”

The students also made an impression on Pramod Khargonekar, Distinguished Professor of electrical engineering and computer science and vice chancellor for research. He stopped in and proclaimed, “Amazing! It’s great to see all these excited students showcasing their stuff.”

While the seniors were showcasing their work, 35 teams of freshman engineering students were busy testing their first-year projects in the quadcopter competition. This contest is a culmination of the Introduction to Engineering class taught by instructors Lawrence Kulinsky and Lily Wu.

Now in its sixth year, the freshman experiential learning class gives students an opportunity to design, build and test a multidisciplinary project in their first year of study. This year, in addition to the 186 freshmen who built quadcopters for autonomous payload delivery, 44 students created fitness trackers and customized apps for step counting, and 24 students worked on a microfluidic/lab-on-a-chip project for autonomous concentration detection.

The task for the quadcopters was to autonomously deliver payloads (foam golf balls) based on sensing of color (red and blue) and distance (4 to 5 feet). The quadcopters used ultrasonic and vision sensors to identify the correct distance range and color, then activated a servo to drop a ball.  The winning team, called the Coolinsky Crew, accomplished successful autonomous payload delivery in 12 seconds, followed by Team Recap, which made it in 17 seconds.

“There were a lot more creative designs this year, with the students using the laser cutter and 3D printer to make interesting shapes for their body and landing gear,” said Wu. “That didn’t necessarily translate into more success than previous years.”

A handheld instrument that gives an immediate bedside reading of the fetal blood pH, pCO2, and/or lactate

A wireless, handheld EEG pen that allows physicians to rapidly diagnose non-convulsive seizures without the lengthy process of ordering an EEG

A building structure that incorporates the solar updraft concept, which uses air movements to rotate turbines and generate energy

Design and building of a carrier-based aircraft, which holds a radome, can carry and remotely drop four loads and has a remotely folding/unfolding wing, to compete in the annual international AIAA and Cessna/Raytheon competition

A simulated space-type system that can be deployed at an altitude of 700 meters, transmit telemetry in real time and use a parachute and autogyro descent-control system to land safely