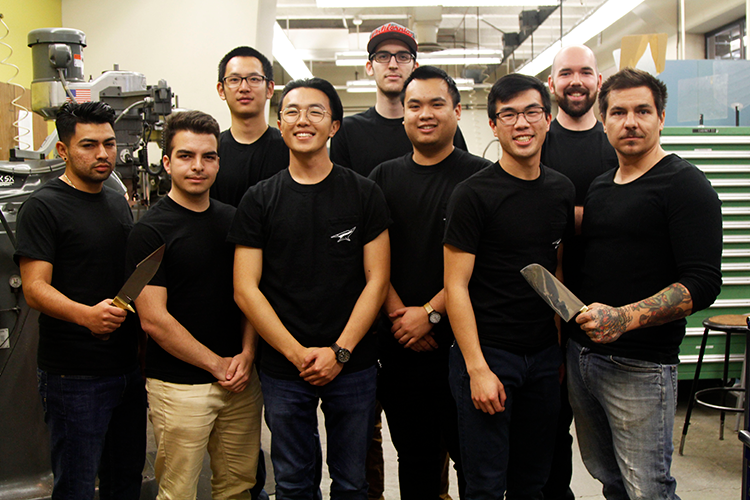 March 25, 2019 - A team of Samueli School undergraduate engineering students took part recently in a unique contest. The TMS Bladesmithing Competition, held every other year in conjunction with the TMS Annual Meeting and Exhibition, took place earlier this month in San Antonio, Texas. It challenges students from around the world to produce a knife blade by hand hammering or trip hammer forging while learning firsthand about topics like heat transfer, coke combustion, forging, welding and quenching. This year, 33 teams competed.

While UC Irvine’s eight-member team didn’t win the contest, the students produced a distinctive blade, and gained knowledge and experience in the process. The team, which participated in the contest for the first time, also compiled a complementary report, poster and video to document its processes.

The blade features a hamon, a visual effect created on the blade by the hardening process. Originally created by Japanese swordsmiths, the hamon indicates a transition between the harder steel at the blade’s edge and the tougher, more ductile steel in the center.

Samueli School machine shop manager Tucker Parris, a bladesmithing hobbyist, mentored the team. “He taught us the basics of making a knife, which we corroborated with our understanding of the relationships between processing and properties of materials,” said Belcher, who added that the hamon is the highlight of the team’s blade. “Tucker Parris has spent years learning the ins and outs of Japanese hamons and taught us what he's learned.”

The team’s blade measured 12 inches long, and the edge reached an extremely high hardness of around 63 Rockwell C. The backbone, in contrast, was relatively soft at approximately 30 Rockwell C. (The Rockwell scale is based on the indentation hardness of a material.) 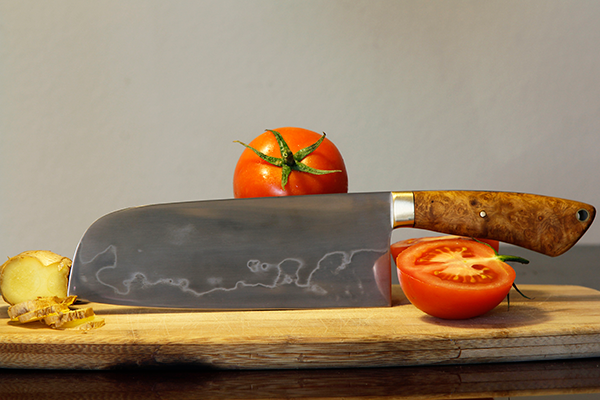 Team members, who applied the materials science fundamentals they learned through classes and research to traditional bladesmithing techniques, plan to try again in 2021. “After attending the competition for the first time, we have a better idea of how to plan our timeline for designing, testing and applying the procedures for making a blade,” said Belcher, who will graduate this year and turn over the leadership role to teammate Jonathan Medrano.

“We were excited to produce a blade and process which hadn't been featured before in the competition,” Belcher added. “We look forward to seeing the judges' official criticisms to improve for the future ... [specifically] learning to control grain size of the material to improve the mechanical properties of the blade.”