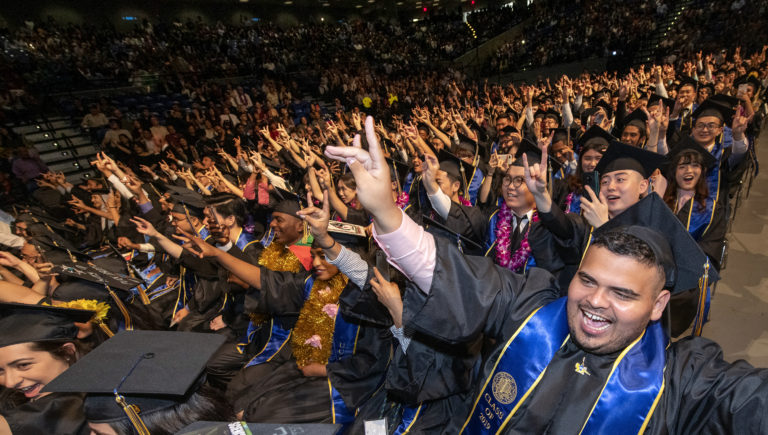 Brilliant Future: The Campaign for UCI seeks to spur groundbreaking discoveries and transform the campus through private donations. It also strives to increase engagement with UCI’s alumni community by establishing connections with at least 75,000 former students by 2024.

“UCI’s mission is to change lives for the better, and a vital part of accomplishing that involves support from community partners, grateful patients, alumni and parents who share our vision,” said UCI Chancellor Howard Gillman.

“We’re excited to lead an effort that will have a transformative effect on the UCI campus, the region and, in fact, the world,” Sheila Peterson said.

Jimmy Peterson, who was CEO of Microsemi Corp. for 18 years, agreed, adding: “UCI’s academic and research prowess makes it one of the greatest resources on the planet. Its impact extends far beyond Orange County.”

Susan and Henry Samueli, whose record-breaking gift in 2017 created the Susan and Henry Samueli College of Health Sciences, are serving as honorary chairs for UCI Health in the campaign. About half of the $2 billion goal is earmarked for strengthening UCI’s healthcare enterprise, partly by expanding the college and clinical facilities.

Other noteworthy projects include constructing research buildings, a new center to house multiple student success programs, and a world-class museum and institute to showcase the university’s acclaimed collection of California art.

This is UCI’s second 10-figure funding campaign. Its predecessor, a decadelong initiative launched in 2005, raised more than $1 billion to finance 500 scholarships and graduate fellowships, endow 50 academic chairs and triple UCI’s overall endowment, among other achievements.

The new campaign began in 2015 and remained in a “quiet phase” until today. Currently, Brilliant Future has tallied $776 million toward its $2 billion goal.

“No matter what issue you care about – climate change, health, the arts, clean energy, educating the next generation – UCI is working on it,” said Brian T. Hervey, president of the UCI Foundation and vice chancellor for university advancement and alumni relations. “Philanthropic funding will allow us to set our sights on carrying out UCI’s ambitious strategic plan despite the realities of state funding.”

The UCI strategic plan, which lays out the university’s vision for the future, calls for expanding the graduate student body, hiring more faculty, boosting UCI Health’s clinical impact, enhancing the arts and humanities, and strengthening UCI partnerships within the community and among its alumni.

To announce the campaign, UCI is hosting a series of events today at the main campus and at UCI Medical Center in Orange, including an address by Chancellor Gillman and an invitation-only celebration at the Bren Events Center.

In addition, local cities will be showing their support for the Brilliant Future campaign. The cities of Orange and Huntington Beach will light up their City Halls in blue and gold from dusk to 11 p.m. Oct. 4-10, and the City of Santa Ana will do the same with its iconic water tower. On campus, the UCI Student Center will be bathed in at night in Anteater colors for the entire month.