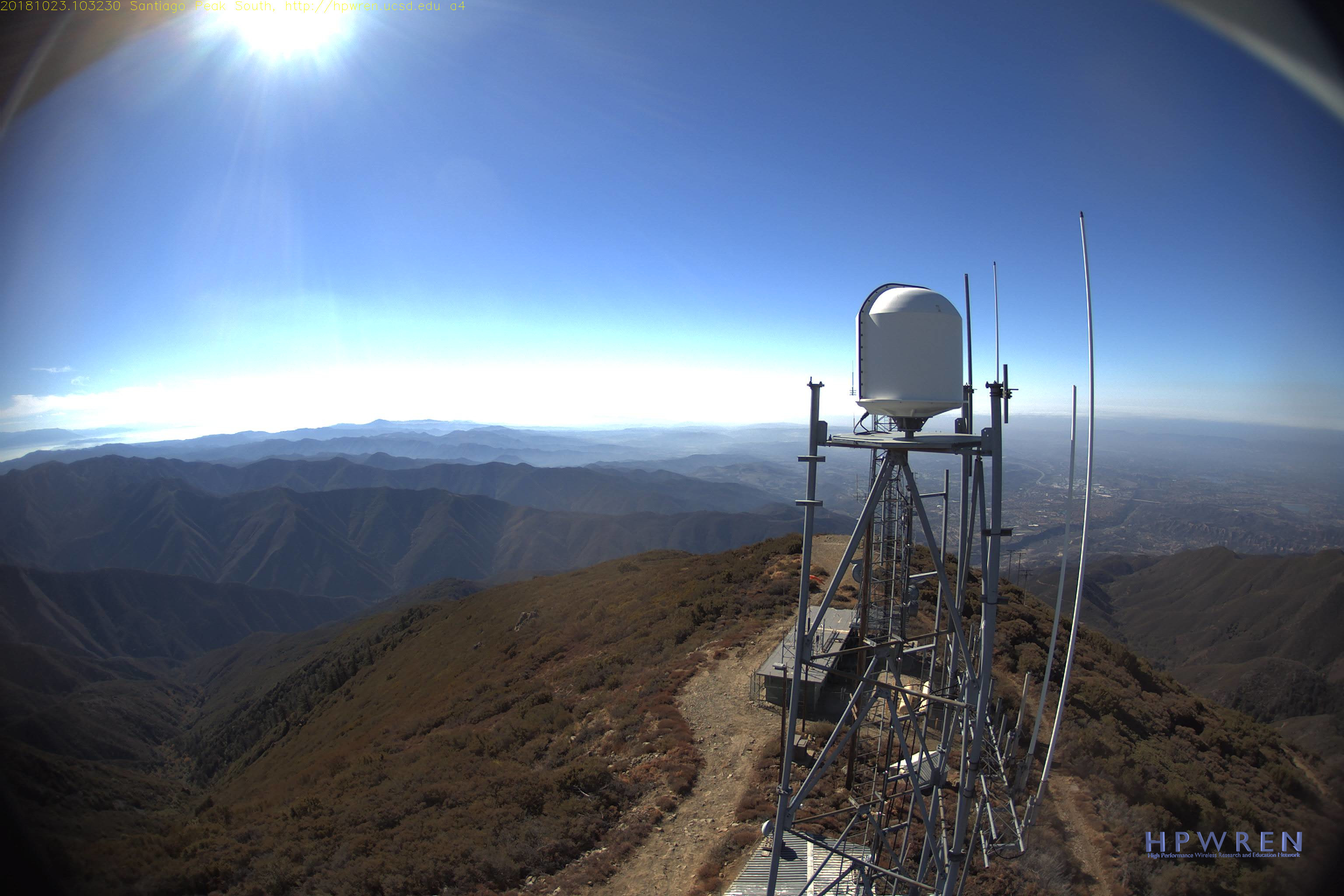 High atop a nearby mountain known as Santiago Peak, six cameras mounted on a Southern California Edison communication tower and connected to a long-range wireless network were broadcasting a continuous live feed of the surrounding area. Images updated every 10 seconds, and ﬁreﬁghters relied on those feeds to decode the ﬁre’s origin, stay apprised of its progress and plan their containment strategy.

Not only that, but Edison used the images to monitor its transmission lines, and decision-makers in Sacramento tuned in to validate the threat to infrastructure and communities. Local citizens were watching, too.

The cameras were installed earlier this year as part of a multi-institution collaboration called ALERTWildﬁre/HPWREN (High Performance Wireless Research and Education Network). Four stationary cameras offer a 360-degree view from Santiago Peak that stretches for miles, and two pan-tilt-zoom (PTZ) models with remote access provide up-close, detailed views. All six are linked to HPWREN’s wireless internet-connected cyberinfrastructure, which broadcasts both a live feed and condensed, time-lapse videos on YouTube and at the HPWREN web interface (http://hpwren.ucsd.edu/cameras/).

HPWREN was created in 2000 and is managed by UC San Diego under the auspices of its San Diego Supercomputer Center and Scripps Institution of Oceanography’s Institute of Geophysics and Planetary Physics. The network, originally funded by the National Science Foundation and now supported by its user community, supports internet-data applications in research, education and public safety. Its nearly 30 installations connect hard-to-reach areas across the remote Southern California backcountry, stretching from San Clemente Island to inland valleys, mountains and deserts, almost to the Arizona border. In addition to about 200 cameras, the Southern California installations include weather sensors, which provide environmental observations including wind speed and direction, and seismometers.

Orange County got on board in April of this year. HPWREN collaborated with the Orange County Fire Authority, Southern California Edison and the University of Nevada Reno’s ALERTWildﬁre.org to install and operate the six cameras on Santiago Peak, extending the network into the county and allowing for real-time ﬁre monitoring. The project also had the support of COAST, the County of Orange Safety Task Force, a group established to improve wildﬁre safety and public awareness in the county.

Last August, after years of planning, an HPWREN router was installed in the CALIT2 Building at UC Irvine, providing additional network access. Geoff Davis, a UCSD analyst who administers the network and oversees installations across the region, credits CALIT2 Irvine Director G.P. Li. “G.P. was instrumental in getting us space at CALIT2 and worked with us to get us access to the resources of UCI,” Davis says.

Li calls the new router a team effort. “The partnership among UCI’s Office of Information Technology, CALIT2, CENIC, UCSD and HPWREN made it possible to bring the infrastructure to Orange County,” he says. “This will help inform OC residents about wildﬁres and will assist ﬁreﬁghters’ plans on how to ﬁght ﬁres.”

The CALIT2 router is a key network connection point. It is linked to CENIC – the Corporation for Education Network Initiatives in California. CENIC provides high-performance, high-bandwidth networking services to California universities and research institutions; if the routers in San Diego lose their connection, the UCI router can function as a pathway to the internet. Additionally, researchers at UCI and CALIT2 now have direct access to HPWREN.

As for the Santiago Peak cameras, they were installed just in time. “This is the second time we’ve put cameras meant for ﬁre protection on a mountain and then had the thing burn over on us or burn right up to the edge of the tower,” says Davis.

OCFA Chief Brian Norton, who relied on HPWREN during the Holy ﬁre, is grateful for the cameras and the fortuitous timing of their installation. The Holy ﬁre, which burned more than 23,000 acres in Orange and Riverside counties in August, could have been far more destructive

“The Alert Wildﬁre/HPWREN network initially was utilized to conﬁrm the ﬁre and location,” Norton says. “Upon initial notiﬁcation of the ﬁre, I was able to view the [stationary] HPWREN cameras, then turn the PTZ camera and zoom in on the location. This validated the location and response prior to the arrival of air and ground resources.”

The SCE communications tower on Santiago Peak offered the perfect spot to mount the cameras. Originally constructed to facilitate the utility’s internal radio and telemetry communications, it affords additional beneﬁts to Edison – which provided approximately $100,000 in funding to bring HPWREN to Orange County – during wildﬁres.

“When ﬁres occur, we can have good intelligence on what the threat is to our system,” says Troy Whitman, SCE senior ﬁre management officer. “The cameras are a beneﬁt to us not only for managing the bulk power on the transmission lines, but also for observing distribution damage. If we know we’re going to have a distribution line that’s going to be impacted, that may become a safety issue for ﬁrst responders or for the public, we can proactively de-energize that line before it’s [too late].”

Edison is collaborating with UCSD to open additional installations throughout its 50,000-square-mile region, which covers 14 California counties from Inyo and Mono on the east and Santa Barbara on the west, all the way to the San Diego border. Over the next couple of years, an additional 75 installations are expected to join the network.

OCFA’s Norton expects HPWREN to aid ﬁreﬁghters in the area for years to come. A video wall is under construction in the agency’s Emergency Command Center to view cameras from all the sites as they come online. “The ability to validate the ﬁre’s location and identify when the ﬁre crosses pre-determined decision points is very beneﬁcial,” Norton says.

OCFA also will employ WIFIRE/Firemap, an NSF-funded real-time, data-driven simulator, predictor and visualizer of wildﬁre behavior. The technology utilizes HPWREN’s cameras and weather sensors, combined with information about fuel types, topography and other data to model potential ﬁre spread. Norton says OCFA used it during the Holy Fire. The agency could “drop a pin” on a map where cameras reported a ﬁre, then forecast the likely ﬁre spread for several hours ahead of its current location. “This can provide invaluable information when determining where ﬁre resources may be needed to protect communities as well as critical infrastructure, such as power lines,” he says.

As new installations come online, the likelihood increases that ﬁre locations can accurately be reported earlier, Norton says. The agency’s plans include working with community partners, like OC Parks and the Irvine Ranch Conservancy, to monitor video walls for potential ﬁre starts on high ﬁre-hazard days.

“As the network is built out across Southern California and beyond, the ability to provide real-time information will provide a signiﬁcant beneﬁt, not only to the ﬁre community but equally important, to the public,” he adds.

SCE’s Whitman agrees: “The situational awareness ... is tremendous. We’ll be able to operate our system in a more well-informed way, and the ﬁre agencies will be able to respond faster and with better intelligence.”