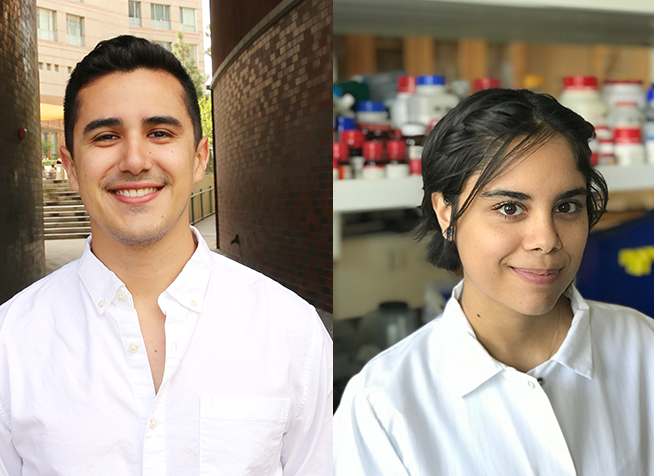 Erik Gonzalez-Leon was named a 2018 Howard Hughes Medical Institute Gilliam Fellow and Evelia Salinas won the 2018 Career Development Award from the Biomedical Engineering Society. Both are doctoral students who work in the lab of UC Irvine Distinguished Professor Kyriacos Athanasiou.

Gonzalez-Leon uses self-assembling methods to tissue engineer the meniscus, the thin fibrous cartilage between the surfaces of joints. He adds biochemical stimuli during tissue culturing to enhance the meniscus’s mechanical properties in an effort to bring it closer to native tissue.

The goal of the HHMI Gilliam Fellowships for Advanced Study program is to ensure that a diverse and highly trained workforce is prepared to assume leadership roles in science. Forty-five graduate students from across the country and their advisers won the fellowships this year (out of 231 applicants). The doctoral candidates selected by the committee all demonstrated the potential to become leaders in their fields.

Gonzalez-Leon and Athanasiou will receive $50,000 a year – including a stipend, a training allowance and an institutional allowance – for up to three years while Gonzalez-Leon completes his doctorate.

“I am excited to be a representative of the HHMI Gilliam Fellowship, and I look forward to doing my part in advancing diversity in the sciences,” Gonzalez-Leon said. “This fellowship will allow me to focus not only on my own scientific endeavors, but also provides a platform for me to spark interest in the sciences among underrepresented groups.”

The BMES Career Development Award supports travel to the society’s annual meeting for underrepresented graduate students, postdoctoral fellows, early career faculty and early career professionals from underrepresented populations in biomedical engineering. Salinas receives complimentary registration and a travel stipend to the October meeting to be held in Atlanta, Georgia. The award assists those who might not otherwise have the funds to attend the meeting so they can benefit from the conference’s programming and networking opportunities. In addition to being a member of an underrepresented population, applicants had to be involved in research and training focused on health disparities and minority health.

“I am very pleased to have won this Career Development Award from BMES,” Salinas said. “The goal of BMES is to create an organization for engineers focused on improving human health, and its membership is composed of biomedical engineers ranging from undergraduate students to field leaders. To be recognized by BMES is truly an honor.”

Salinas and Gonzalez-Leon’s adviser, Athanasiou, was understandably pleased with his students. “Both of these students are outstanding and a pleasure to have in our department. We are so lucky to be surrounded by excellence,” he said.