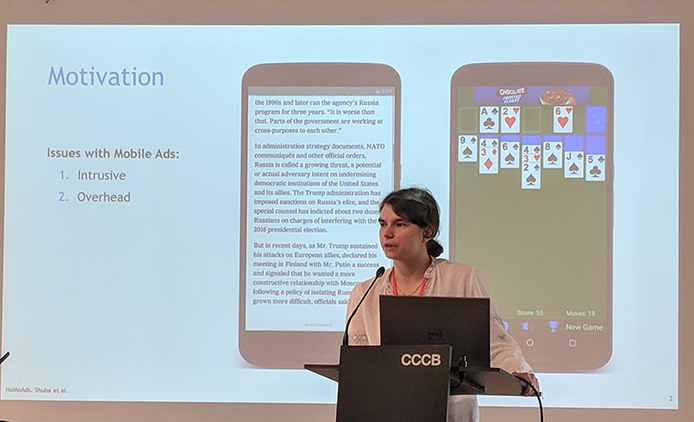 “I was happy that my hard work had finally paid off,” Shuba said of her award. “I spent a lot of time on the paper and presentation with the goal of claiming the award.”

Shuba, whose graduate adviser is Athina Markopoulou, is researching a method of blocking ads from appearing in apps on mobile devices. She is first author on NoMoAds: Effective and Efficient Cross-App Mobile Ad-Blocking, co-written with Markopoulou and University of Iowa collaborator Zubair Shafiq. The NoMoAds approach leverages the mobile device’s network interface to intercept, inspect and block outgoing packets from all apps. It extracts features from packet headers and/or payload to train machine-learning classifiers to detect those ad requests.

Testing indicates it works; the ad blocker achieved an F-score, which analyzes both precision and recall, of up to 97.8 percent. And it is efficient, blocking ads in real time. “To the best of our knowledge, NoMoAds is the first mobile ad blocker to effectively and efficiently block ads served across all apps using a machine-learning approach,” the authors wrote in the paper’s abstract.

The annual Privacy Enhancing Technologies Symposium brings together privacy experts from around the world to present and discuss recent advances and new perspectives on research in privacy technologies. The Andreas Pfitzmann Best Student Paper Award is named in memory of the internationally recognized German computer scientist who died in 2010. The prize is awarded to papers written solely or primarily by a student who is presenting his/her work at the conference.