Eleven Alumni Inducted into Hall of Fame at Joint Celebration 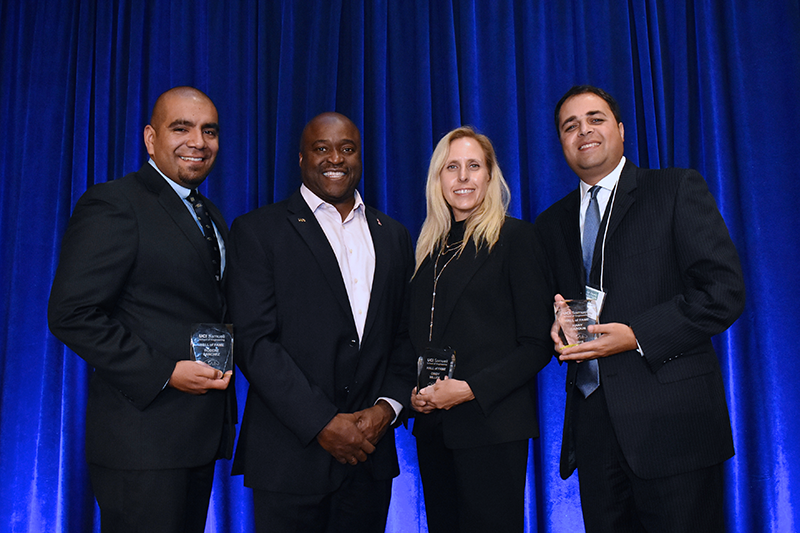 March 7, 2018 - Alumni, family, faculty and friends of UC Irvine’s schools of engineering, information and computer sciences and physical sciences came together Friday night, March 2, in a sparkling celebration of accomplishment as 11 new members were inducted into their school’s Hall of Fame.

Held at the Lyon Air Museum, a glitzy hangar at John Wayne airport housing an array of enormous and gleaming aircraft and other rare military vehicles, the event drew nearly 250 attendees who braved a rainy night to revel in their colleagues’ and schools’ accomplishments.

Samueli School Dean Gregory Washington welcomed engineering and ICS affiliates in the crowd to the third annual Hall of Fame Event, while clarifying that the School of Physical Sciences was joining the collaboration for the first time this year. “It really makes sense that we all do this together,” Washington said.

“Your UCI degree has never been more valuable than it is today, and it will continue to increase in value,” he told the audience, ticking off a list of accomplishments: talented and highly recruited faculty, a dynamic research environment and outstanding students. “We’re not taking small steps, we’re taking big ones, and that’s going to continue well into the future.”

After introducing many of the school’s sought-after new faculty and detailing their accomplishments, Washington shared the achievements of younger faculty and students, and lauded the school’s many triumphs. “To see us accomplish what we’ve accomplished, I’m just ecstatic,” he said.

He also told the audience about a new scholarship established this year by Hall of Famer Nick Desai ’91 electrical engineering, and several classmates, in memory of fellow alumnus Kelvin Javier, who passed away last year. “This scholarship will play an active role in identifying and matriculating highly deserving and highly competent engineering students,” Washington said.

He then introduced Ken Janda, dean of the School of Physical Sciences, who praised the cooperation between all three schools, saying, “I also couldn’t be more proud to be here tonight.” Janda shared details of the campus’s new Interdisciplinary Sciences Building, planned to break ground this spring. “The whole idea of this building is to break down silos … and it’s just a wonderful collaboration.”

Janda introduced his school’s departments, including faculty, student and outreach accomplishments. “One thing I like to brag about,” he said, “is when I came here 25 years ago, we’d have a graduate student win a National Science Foundation graduate research fellowship every few years. Now we have 30 at one time,” he said to applause.

Marios Papefthymiou, ICS dean, remarked on the size of the audience. “Last year, which was my first event,” he said, “I think the crowd was half this large. This event is getting better and better.”

Papefthymiou told the group that his school “was also taking off, just like the planes right outside this window.” He addressed an increase in the numbers of applicants and students in ICS, the addition of new master’s programs and a number of faculty accolades. He also discussed his school’s departments and research focuses, lauding their interdisciplinary approach. “I think it’s really exciting to see what’s happening around our campus,” he concluded.

Each of the three deans recognized his school’s new Hall of Fame inductees individually, after which, one alumnus from each school addressed the audience.

Robert Sanchez ´02 M.S., ´05 Ph.D. mechanical and aerospace engineering, develops products at Glaukos, where he is currently at work on minimally invasive glaucoma surgery implants. After expressing his gratitude to the Samueli School for recognizing him, he said: “This year’s cohorts span the following technologies: chemistry, clean fusion, cybersecurity, detection of infectious diseases, financial risk management, lasers, machine learning, surgical eye care, transportation, water resources, vision effects and animation, all of which play an amazing role in our world today … and tomorrow. I think it’s fair to say that UCI is a place where amazing things happen and where amazing things will continue to happen.”

Physical sciences inductee Michl Binderbauer ´93 M.S, ´96 Ph.D. physics, oversees research and development at TAE Technologies, a clean-fusion energy technology company. “It is certainly true for all of us that UCI was a transformational place,” he said adding that his company sprang from research he conducted as a doctoral student. “That carried over into this company that today has grown to about $550 million in investments and about 200 brilliant people working here in Orange County.”

Sivan Mahadevan ´85 computer sciences, is managing director of Morgan Stanley’s risk management department in New York City, where he leads a team that models risk and financial regulation implementation.  Mahadevan recalled first stepping foot on the UCI campus as a teenager. “UCI was a teenager too, at the time,” he says. “We got a tremendous amount of attention from our professors.”

He told the audience of meeting his adviser at Columbia University during his first week of graduate school.  “He put a list of courses in front of me and told me I had to take all of them,” Mahadevan said. “I looked at it and I said, ‘I’ve already had all these courses as an undergraduate.’ He was a little shocked. He told me I still needed to take 30 credits so ‘take whatever you want.’ That was kind of cool.”

The 2018 Hall of Fame inductees include: