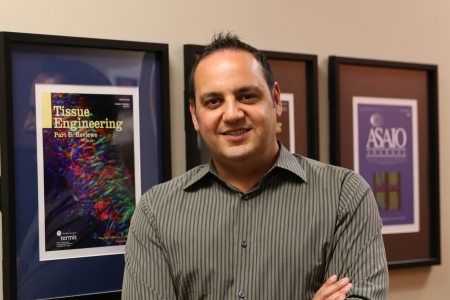 Nov. 7, 2018 - For people with heart disease, particularly aortic valve stenosis, valve replacement is the primary treatment option. A common and serious problem, aortic valve stenosis is a narrowing of the valve opening, which restricts blood flow from the heart to the rest of the body. Since 2011, when the FDA first approved it, transcatheter aortic valve replacement (TAVR) has been a less invasive choice, as opposed to traditional open-heart surgery, for patients at high surgical risk.

However, sometimes a complication of TVAR is a tiny gap that occurs between the patient’s natural heart valve and the implanted valve. Called paravalvular leak, or PVL, this gap leads to blood flow leakage from the aorta back into the heart’s left ventricle (regurgitation).

Although mild PVL is usually less significant, moderate PVL may lead to symptoms of heart failure, including fatigue and difficulty in breathing, among other complications. Moderate to severe regurgitation after TAVR has a poor prognosis and is associated with higher mortality.

In a study published Oct. 23, 2018, in Nature’s Scientific Reports, UC Irvine Professor Arash Kheradvar and his team found that PVL leads to formation of an abnormal swirling pattern (vortex) in the heart’s left ventricle that clearly interferes with natural blood flow from the left atrium into the left ventricle. This negatively affects blood flow dynamics, including circulation, impulse and kinetic energy.

According to Kheradvar, there has been no previous study reporting how PVL affects the blood flow dynamics inside the heart after TAVR. Using echocardiographic particle image velocimetry, an advanced method to measure the heart’s blood flow velocity based on echocardiography, the researchers were able to observe and study various fluid dynamic events that occur inside the heart relative to the location of the leak.

“Our in vitro and in vivo studies show that posterior PVL is significantly more harmful than anterior PVL considering the blood flow dynamics inside the heart. According to those results, we predict that presence of posterior PVL may lead to worse patient survival and outcomes compared to anterior PVL and no PVL,” said Kheradvar, a Samueli School professor of biomedical engineering.

This study’s results emphasize the significance of the PVL location, since the posterior PVL has a more clinically negative impact on intraventricular fluid dynamics. Accordingly, Kheradvar suggests more careful follow-up after TAVR, and if needed, early therapeutic interventions that may include PVL repair.

Daisuke Morisawa, the study’s first-author, recently completed his postdoctoral fellowship at UCI in Kheradvar’s lab and is now an assistant professor at the Hyogo College of Medicine in Osaka, Japan. In addition to Kheradvar and Morisawa, the other authors are Ahmad Falahatpisheh, a UCI Ph.D. graduate, and Eleonora Avenatti and Stephen H. Little, who are both cardiologists at the Houston Methodist DeBakey Heart and Vascular Center.