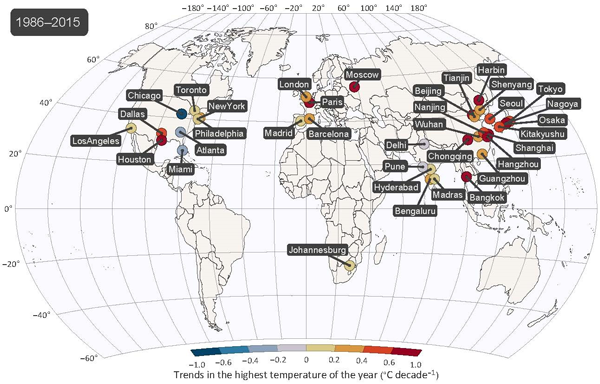 Jan. 24, 2018 - While our planet’s average annual temperature has increased at a steady pace in recent decades, there has been an alarming jump in the severity of the hottest days of the year during that same period, with the most lethal effects in the world’s largest cities.

Engineers at the University of California, Irvine have learned that urban centers with more than 5 million inhabitants and parts of Eurasia and Australia have been hardest hit by the accelerated growth in short-term, extreme-heat events, resulting in lost lives, reduced agricultural productivity and damage to infrastructure.

In a paper appearing in the American Geophysical Union journal Earth’s Future, the researchers report that their analysis of temperature readings from the most recent 50- and 30-year periods rules out the possibility that natural climate variability is to blame for the mercury rising.

“The global average annual temperature has increased over the past three decades at a rate of 0.20 degrees Celsius per decade, but we have found that the maximum temperature of the year has climbed at a much faster rate – two to three times higher in such regions as Eurasia and parts of Australia and more than three times higher in some megacities,” said Efi Foufoula-Georgiou, UCI Distinguished Professor of civil & environmental engineering and senior author on the study. “These results are alarming and yet more evidence of the harsh impact of global warming being felt by people around the world today.”

The research team analyzed data on the hottest day of the year from 8,848 land surface weather stations around the world. Looking at thermometer readings for the 50-year period ending in 2015, they saw an average international increase in short-term highest temperatures of 0.19 degrees Celsius per decade; the growth accelerated to 0.25 degrees per decade in the 30 years from 1986 to 2015.

Hottest-day-of-the-year measurements for major cities such as Paris, Moscow and Tokyo climbed precipitously by as much as 0.60 degrees per decade during the period studied. More than just temperature readings on a map, these events have taken a severe human toll: A heat wave in Europe in 2003 caused roughly 70,000 deaths, and another in Russia in 2010 killed nearly 55,000 people. In the United States, an average of 658 deaths due to excessive heat were reported per year between 1999 and 2009.

The researchers, from UCI’s Henry Samueli School of Engineering, highlighted an urban phenomenon known as the “heat island effect.” In human-made environments dominated by asphalt, concrete, glass and steel, hot air lingers and the sun’s scorching rays scatter and reflect off hard surfaces. While expanses of green vegetation and water in nature help to absorb or dissipate heat, cities amplify it.

“Our priority in this study was to maintain strict data quality control and to investigate if changes accelerated over the recent 30-year period,” said lead author Simon Michael Papalexiou, a postdoctoral scholar in the Department of Civil & Environmental Engineering. “We chose to drill down into conditions in megacities, where temperature extremes matter the most. Our question now is: Will this acceleration continue into the future? Because if it does, adverse effects for human societies are inevitable.”

This research was supported by the National Science Foundation, the National Oceanic & Atmospheric Administration and NASA.