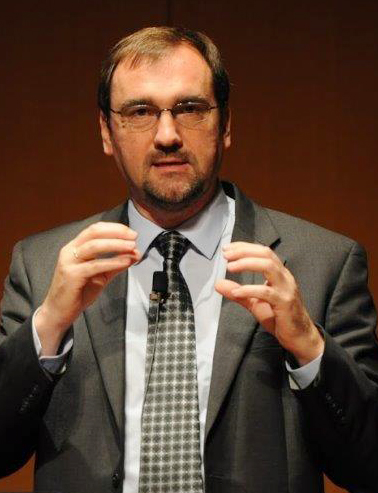 A professor of mechanical and aerospace engineering with a joint appointment in biomedical engineering, and electrical engineering and computer science, Shkel is an IEEE Fellow who has been on the UC Irvine faculty since 2000. He took a leave of absence from 2009 to 2013 to serve as a program manager in the Microsystems Technology Office of the Defense Advanced Research Projects Agency (DARPA). His research interests include high-performance inertial sensors, micro-electro-mechanical systems (MEMS) and implantable vestibular prosthetics.

He has been an active participant in IEEE for nearly two decades. Shkel served as general chair of the 2005 International IEEE Sensors Conference; founded the IEEE International Symposium on Inertial Sensors and Systems, chairing the conference four times; chaired the Sensors Council’s Strategic and Operating Plans Committee; helped establish the IEEE Sensors Letters journal, serving as associate editor-in-chief; and held other organization leadership roles, including vice president of conferences, VP of technical operations and served on several editorial boards.

Shkel will serve as president-elect of the council in 2018-19, after which he will assume the presidency for two years beginning Jan. 1, 2020. His agenda includes developing new IEEE sensor technology programs, products and services, including a Wikipedia-type sensors portal, expansion of educational programs and creation of new outreach activities. Shkel also will represent the IEEE Sensors Council on the IEEE-U.S.A. Research and Development Policy Committee, where he will provide technical advice to government policymakers, and promote guidelines that enhance national economic security and competitiveness.

“I have been involved in IEEE Sensors Council … in many different capacities,” Shkel said of his new responsibilities. “I understand council operation firsthand, including conference venue selection, working with conference management companies and contractors, organizing conference tutorials, management of contracts and budgeting, and working with volunteers in chapters, academia and industry.”