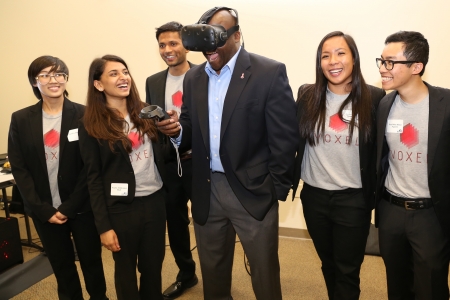 March 29, 2017 - Anteater engineers took over the UC Irvine Student Center Friday, March 17, for the Samueli School annual Winter Design Review, and although the event fell on St. Patrick’s Day, luck − good or bad − had nothing to do with its success. Only hard work, imagination and smart designs were reflected in the display of 138 projects put together by 838 undergraduate students.

The day began with green pancakes for the nearly 60 industry representatives who attended the Dean’s Breakfast and presentation by Samueli School Dean Gregory Washington. The dean told the crowd that this was the biggest Design Review in the school’s history: “This is our largest group yet, and the first group of seniors who, a portion of them, have had the chance to participate in our first-year experiential learning program as freshmen. These kids will be starting companies. They are altruistic. They believe they can change the world.”

After working on their design projects for two quarters, the students proudly displayed, demonstrated and presented their ideas to industry reviewers as well as a wider audience of faculty and staff. More than 100 industry representatives split up into breakout rooms where they listened and reviewed student teams who rotated through to present their projects.

One of the reviewers, longtime Engineering Leadership Council member Peter Fiacco, was impressed with this year’s teams. “The professionalism and technical content is extremely high. Dean Gregory Washington has taken this program way beyond the scope of most undergraduate programs,” said Fiacco, a technology leader and entrepreneur.

“There are a lot of amazing projects here today,” said Stephen Wray, director of electronics and payloads products at Northrop Grumman, the event sponsor. “Congratulations on the projects completed and all that you’ve learned.”

Washington recognized 13 projects for the Dean’s Choice Awards, see below.  “Each year, the projects get better and better,” he said. “You are showing us that by how smart the ideas are and how well you can explain them.”

The afternoon featured the quadcopter competition, a culmination of the Introduction to Engineering class taught by instructors Lily Wu and Amy Dunford. Now in its fifth year, the freshman experiential learning class gives students an opportunity to design, build and test a multidisciplinary project in their first year of study.  This year, in addition to the 226 freshmen who built quadcopters, 48 students created fitness trackers, and 22 students worked on a new lab-on-a-chip project.

Thirty-eight teams made quadcopters that could fly and autonomously detect locations and objects within a cage. The winning team was Zot Propulsion Laboratory (ZPL), with Los Arduinos taking second place and No Hands in third. The ZPL team was able to correctly detect the heights and locations of all three objects within the cage and wirelessly transmit the data to an LED panel.

“It was challenging, but we were resilient,” said Eric Abdulaziz, team captain and device pilot. “The TAs were good, they kept encouraging us. We made our quadcopter really compact and designed it with all the wires hidden.”

Critical-Care Device for Detection of Hemorrhagic Stroke in an Acute Setting – a device for detecting an intracranial hemorrhage for use in an acute primary care situation.

3-D Visualization and Modeling for Epilepsy VOXEL – a system to provide 3-D visual representation of a patient’s brain to aid in surgical treatment of epilepsy, and enable 3-D printing of the brain from acquired images.

Aldrich Park Stream Restoration – a master plan that addresses the current and future drainage needs of a section of the UCI campus to improve water quality and reduce the amount of runoff discharged into San Diego Creek.

San Vicente Energy Storage Facility – a real-world project in the study phase that involves an energy-storage system based on building an upper reservoir, tunnels and a pump turbine system.

No Tool Left Behind – a novel system to detect objects using magnetically tagged instruments and a magnetometer array that provides simple visual detection of the tool left behind.

HyperXite – a prototype Hyperloop pod as a part of the SpaceX Hyperloop Pod Competition to accelerate future development of a full-scale Hyperloop.

Autonomous Boat – an autonomous boat that can navigate the open ocean and compete in the Microtransat Challenge with the goal of successfully crossing the Atlantic Ocean from Newfoundland to Ireland without human input.

Krobohand – a sleek, clean and recognizable upper-limb prosthesis made using dual material 3-D printing and a streamlined process of connectivity with electromyography. 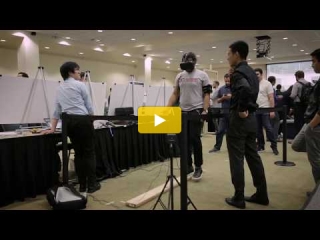