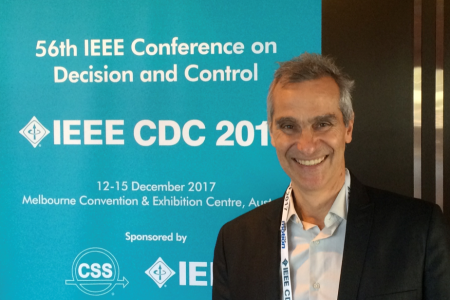 Dec. 15, 2017 - Tryphon T. Georgiou, a UC Irvine Chancellor’s Professor of mechanical and aerospace engineering, has received the 2017 George S. Axelby Outstanding Paper Award from the IEEE Control Systems Society. This is the fourth time Georgiou has won the award, a record that only two other academics have attained since the establishment of the honor in 1975.

The award recognizes the most outstanding paper published in the past two years in the society’s journal, the IEEE Transactions on Automatic Control. Papers are judged on originality, potential impact on the theoretical foundations of control, importance of significance in applications, and clarity.

“I distinctly recall when I received the news of my first Axelby award, in 1992,” said Georgiou. “I can assure you that the pride and excitement today, 25 years later, is no less intense. All through the years, I have been lucky to have had wonderful collaborators and students who brought in the intellectual resonance and drive for these works.”

Georgiou’s winning paper, co-authored with Yongxin Chen (Iowa State University) and Michele Pavon (University of Padova), is titled “Optimal Steering of a Linear Stochastic System to a Final Probability Distribution, Part I,” and was published in the May 2016 issue of the IEEE Transactions on Automatic Control, Vol. 61. It deals with the fundamental problem of how to contain uncertainty about position, velocity, etc., of a dynamic system, an aircraft or vehicle for example, or of a collection of systems. The problem has its roots in a thought experiment devised by Austrian physicist Erwin Schroedinger in 1932 to understand the propagation of uncertainty in particles systems; his ultimate goal then was to construct a classical physics-based alternative model for quantum mechanics.

“After carrying out our own study from a controls perspective, it has been truly remarkable to see the many directions that have opened up, due to the link with Schroedinger’s work, which go far beyond the subject of control, into statistical mechanics, thermodynamics and more,” explained Georgiou. “I feel excitement and energy going forward, to advance this circle of ideas, and I feel especially privileged doing so within the fostering and bubbling-with-ideas academic environment that UCI provides.”

Georgiou accepted the award during the CSS Awards Ceremony at the 2017 IEEE Conference on Decision and Control (CDC) in Melbourne, Australia, in December 2017.