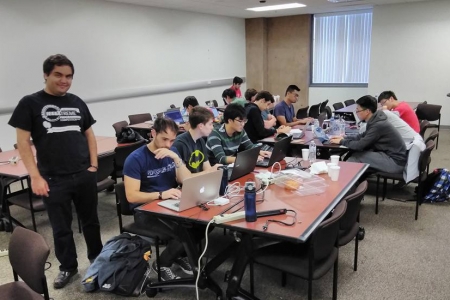 Nov. 21, 2017 - Two dozen UC Irvine computer science and engineering students spent 24 hours holed up in a room with heads buried in their laptops. They were participating in IEEE’s worldwide programming contest, IEEEXtreme 11.0 . This global online challenge pits teams of IEEE student members, advised and proctored by an IEEE member, against each other to solve a set of programming problems.

UCI team the 76ers (Wyte Krongapiradee, Kevin Wang, and Pasha Khosravi) placed second in the U.S., behind Georgia Tech, and 23th worldwide. Their prize is a Series 2 Apple watch. UCI had eight three-person teams competing. The problems they solved spanned a range of topics including sorting and searching, graph theory, dynamic programming and optimizations. All levels of programmers were welcome. There were 3,342 total teams from around the world participating.

Quoc-Viet Dang, a Samueli School assistant professor of teaching who advises the UCI IEEE student branch, proctored the event. “It's inspiring to see students collaborate and enjoy working on complex coding problems,” said Dang. “I plan to work with the students and other faculty in our department to build more events based on the core concepts from IEEEXteme. This is something many Anteaters from engineering and computer science should experience during their time here at UCI.”