A Molecule at a Time

A prolific inventor brings to light a novel view of nanotechnology 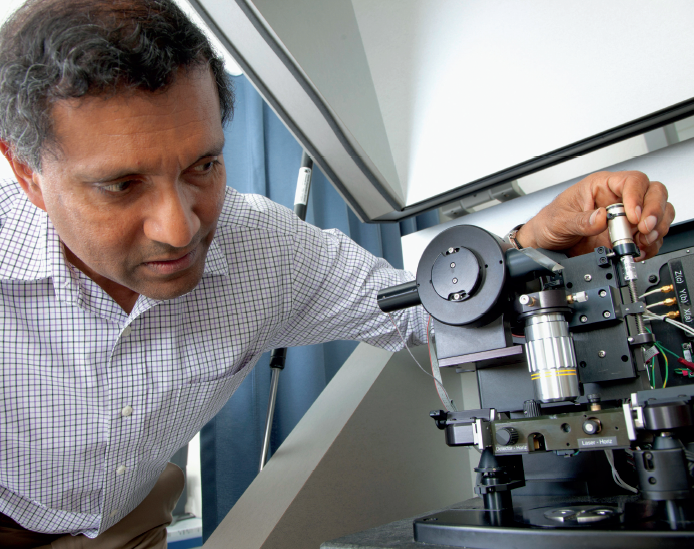 Nov. 28, 2017 - The world is witnessing a new industrial revolution. Unfortunately, we are having a hard time really seeing it.

An explosion in advanced nanotechnology tools and techniques is fueling innovation in materials, goods and medical therapies but the nano-sized mechanisms that comprise these products are invisible to the human eye. Even today’s high-powered scanning electron microscopes are limited in their ability to visualize the minuscule structures that most often self-assemble via chemical reaction. And, because most SEMs operate in a vacuum, they are further limited in the materials they can examine and the information they can provide.

It is fortuitous, then, that Kumar Wickramasinghe, intrepid inventor and Henry Samueli Endowed Chair, had the foresight to co-invent a microscope that can visualize nanomaterials and biological systems with nanometer resolution. The Photo-induced Force Microscope, which Wickramasinghe created with former colleague Sung Park, allows scientists to study the surfaces of these minuscule materials at the molecular scale by detecting the force caused by the presence of light.

Not only can the instrument map a structure’s surface, it can pinpoint and identify molecules by their distinctive molecular signatures. Furthermore, researchers believe it can help make movies of single molecules in action by employing very short pulses of light. And, it can operate outside of a vacuum, making it useful for examining biological samples.

Using light – the microscope has top, bottom and side illumination – the photo-induced force microscopy (PiFM) technology detects the force between the tip of the microscope and the sample. Because the microscope can measure the vibration signals emitted by single molecules, users can identify each molecule on a material’s surface and build a visual representation of material and biological systems at nanometer-scale resolution. This capability is important for a number of reasons. One, Wickramasinghe explains, is molecular rotation. Molecules can rotate light in left-handed and right-handed directions, changing very similar molecular formulas into drastically different mixtures. This is especially crucial in drug compounds, where a slight modification in the rendition of molecules can transform a life-saving medication into a poison. “Right-handed molecules essentially have the same chemical formulas as left-handed molecules but slightly different structures; this microscope lets us see those things,” he says.

Additionally, in polymer science, most molecules self-assemble, so it’s important to make sure they do so according to plan. Until now, there has not been a way to verify this. “These microscopes allow us to see exactly whether a molecule is going to the place you want it to go,” adds Wickramasinghe.

He and Park spun off the technology into a company called Molecular Vista, headquartered in San Jose, Calif. The company has sold its microscopes to universities in the U.S. and abroad. UC Irvine has three.

One of those is in the Department of Chemistry, where Wickramasinghe is collaborating with physical sciences faculty to study previously inaccessible properties of matter. Matter has both electronic and magnetic properties but light’s electric field is much stronger than its magnetic field in propagating light waves. Therefore, most light-based microscopes can access electronic energy states more easily.

But there is much to be learned from matter’s response to magnetic fields. For the first time, this PiFM technology affords scientists the opportunity to observe magnetic interactions, which could have applications in CD storage, molecule orientation, drug development and more. “It’s really hard to predict what new applications may come out of this,” says Wickramasinghe. “It’s a whole new set of dark states of matter that have not been accessed before.”

Chemistry professor Eric Potma, who is collaborating with Wickramasinghe, says, “On the nanoscale, optical magnetic interactions can grow as strong as their electric counterparts, but it has not been easy to visualize the magnetic field of light at such scales.”

He adds: “If this is successful, optical magnetic fields can be mapped out with great precision on the nanoscale, which would be a unique capability of direct relevance to developing new optically active nanomaterials.”

In another collaboration with UCI’s Chemistry at the Space-Time Limit center, researchers are using PiFM to try to make real-time videos of individual molecules in action. By shooting very short pulses of light at molecules, scientists can freeze the action at extremely short time spans – about 10-⁶ nanoseconds – capturing reactions as they occur. “These short pulses of light can give you a snapshot,” according to Wickramasinghe. This can lead to better understanding of electron transfer, structural dynamics and chemical reactions.

This innovative approach opens the door to the previously impossible. “With Professor Wickramasinghe’s technique, we have been able to do such ultrafast optical experiments on the nanoscale, a scale previously unthinkable for these kind of measurements,” Potma says. “Ultimately, this approach promises a new view of molecular dynamics, one molecule at a time.”

The electrical engineer is building consumer-friendly silicon chips that can detect the onset of disease or monitor genetic changes that can trigger progression of disease − such as cancer− within minutes, by detecting specific DNA sequences in bodily fl uids. Users would put a drop of blood or other fluid into the chip, seal the compartment and turn on the processor. The chip, treated with specific DNA sequences, will fi nd and attach to matching DNA in the blood sample, amplifying the DNA roughly a billion times so it can be detected electrically and identified.

Each chip could hold up to 100 different DNA sequences in individual compartments, allowing a single chip to rapidly identify that many different conditions or diseases. Wickramasinghe envisions the device encased in a small, Fitbit-like package that will plug into a user’s cell phone and deliver results in minutes.

The engineering visionary, who is credited with developing a long list of high-tech tools and instruments including the vibrating mode AFM, silicon tips and the AFM jet for rapid molecule sorting and delivery, recently won a Proof of Product grant from UCI’s Applied Innovation for the rapid DNA test idea. He hopes to add this device to his growing list of commercialized products. “This is pretty exciting. I think it could have lots of applications,” he says.

The last in his trilogy of “things that excite me now” is a project that examines and even modifies the genetic code of cells. Using an electrically driven nano-pipette, he has successfully injected DNA sequences into a cell’s nucleus. The nucleus has incorporated this new DNA into its own genome while continuing to grow and divide. This advancement could allow for better understanding of the cell’s network of genetic pathways and lead to more individualized disease treatment.

His team also has used the nano-pipette to extract cell material, allowing scientists to examine what proteins the cell is producing. “What the cell does is very much driven by the different proteins it is making,” Wickramasinghe says.

Coupled with his previous research, which resulted in a method for removing Messenger RNA from a cell using the tip on an atomic force microscope, this technology gives scientists a new way to study drug interactions on a cellular level.

Wickramasinghe’s goal is to combine these currently separate technologies into a single tool that can examine and change the genetic structure of a single living cell. “We envision treating a population of living cells with a drug, going into a cell and quantifying the cell’s behavior before and after drug delivery. Then we can understand if the drug is doing what the manufacturers have designed it to do,” he says.

“If you can do it on one cell, while it’s still alive, then you are basically studying the whole system,” Wickramasinghe explains. “If you study many cells, you get an average and that is not as good.

“To study what’s going on, you really need to study single cells,” he summarizes, lending credence once again to his theory that – assisted by his groundbreaking technology – one can gain the largest quantity of information by examining the smallest available element.