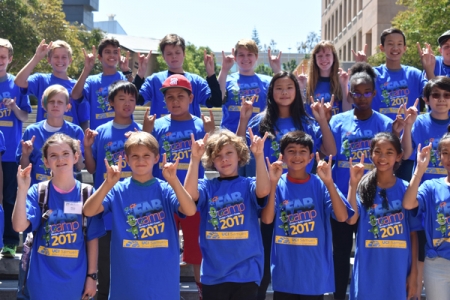 Oct. 10, 2017 - With a mission to inspire young people in STEM, the Samueli School’s summer outreach programs are are growing and gaining popularity. Based on its highly successful freshman experiential engineering course, the school has developed programs that feature hands-on, project based education. For most, these experiences are the first exposure to engineering disciplines. This year more than 220 students – from middle and high schools to community colleges and incoming freshmen – participated in a variety of programs at the UC Irvine engineering school.

As FABcamp entered its fifth summer, six weekly sessions drew 150 sixth- through ninth-graders, including one from out-of-state and four international students. These middle school FABcampers immersed themselves in engineering through projects that emphasized STEM concepts, as they experimented with computer-aided design, rapid prototyping, digital making and fabrication technologies.

Each week the campers worked in teams on engineering design challenges. They made balsa-wood airplanes, cast plaster models of their thumbs, learned how to build basic circuits and created LED display boards. They constructed index-card structures and strength-tested them with bricks. They made hand-shaken vanilla ice cream, created a fuel cell and put together a simulation prosthetic heart valve using plastic pipe cleaners, modeling clay, duct tape and a Styrofoam ball. On the final day of camp, they built vacuum-powered hovercrafts, then took turns riding them.

According to Leyla Riley, director of academic innovation and partnerships, Dean Washington created the FABcamp program to expose young students to engineering disciplines. Over five summers, It has taken on a life of its own. ”We are now seeing its impact on the academic trajectories of students who have moved through the series. Participants walk away with far more than awareness and exposure to engineering, but with tangible skills such as 3-D modeling, fabrication, soldering, circuit building and coding. Demand for the program beyond the three-part series was so significant that we created a formal internship option that allows returning students to serve as peer mentors. The evolution has been extraordinary to watch, and I am now seeing participants from our 2013 inaugural class pursue STEM majors in college.”

The 39 ASPIRE (high school) and 10 INSPIRE (community college) students spent two weeks at UCI in a residential program designed to ignite STEM interest and skills of those from low-resource communities. The students teamed up to create prototypes of Internet-of-Things products using a network of physical objects embedded with electronics, software, sensors and connectivity that allowed data to transfer over a network, without requiring human-to-human or human-to-computer interaction. The Internet of Things-themed projects included a smart watch, smart home, smart translator and smart doorbell among others.

About half of the students were female, and most of them were from racial and ethnic minority groups underrepresented in STEM fields. A survey showed that after their summer experience, 92% of participants stated the program made them feel confident in their abilities to perform tasks that will allow them to succeed as engineering and computer science students.

Seven students from St. Margaret’s High School attended a six-week summer internship program in which they produced six project designs. Now in its 13th year, the St. Margaret’s-Samueli School program matches high-potential students with an engineering faculty member and research area based on their interests. Spearheaded by Engineering Leadership Council member Stacey Nicholas, the program aims to inspire enthusiasm for STEM fields with the hope that the high school students will pursue these areas as they move forward in their educations and careers. Along with university-level engineering research experience, the students also receive college credit.

This year’s students presented research projects that included building an autonomous drone with Raspberry Pi, determining the effect of nanobubbles on soil permeability and studying brain tumor cells in vivo.

Now in its second year, the Office of Access and Inclusion’s (OAI) summer transition program provides incoming students in engineering, and information and computer sciences, an opportunity to become familiar with the UCI community prior to the start of their academic careers. The OAI scholars gain hands-on, project-based experience and academic enrichment in selected subjects that have proven historically difficult for first-year students. Fifteen OAI scholars took advantage of the three-week residential program this year, creating seven projects. Among their efforts were a voice-activated weather report device, a wallet that uses imaging and GPS coordinates to alert its owner via cell phone when lost, and a doorbell that employs facial and voice recognition to unlock a door.

“This program gave me a boost and prepared me for a good transition to college,” wrote one participant in his program evaluation survey.

“It has made me realize I chose the right major,” wrote another. “Now I’m more motivated than ever to pursue my dreams.”

The Base 11 Summer Fellows program helped six community college students spend seven weeks at the Samueli School, working in teams to design and build unmanned autonomous systems, or drones. Through a partnership with the nonprofit Base 11, the summer fellowship program aims to help high-potential, low-resource students succeed in STEM. The students in the Autonomous Systems Engineering Academy received a stipend and lived on campus while working on their projects.

East Los Angeles resident and community college student Maria Hernandez said the fellowship was “a really good experience,” especially not having to commute and getting paid. She also enjoyed working with a partner who was just as strongly opinioned as she was as they built their drone. “We had some different ideas that we went back and forth on, but it was a really good way of validating my thinking and learning.”