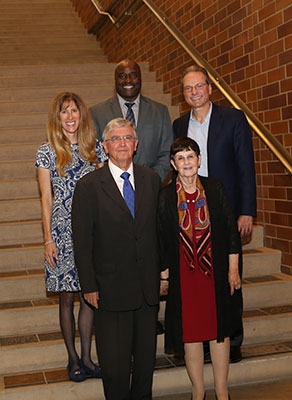 Sept. 22, 2016 – It was standing room only in the Calit2 auditorium last night as 125 friends, family members and supporters of former Samueli School Dean Nicolaos Alexopoulos joined together to honor him and his wife, Sue Curtis Alexopoulos, after a UC Presidential Chair was named for them.

The Nicolaos G. and Sue Curtis Alexopoulos Presidential Chair in Electrical Engineering and Computer Science at UC Irvine honors Alexopoulos, who served as dean from 1997 to 2008, and his wife, an ardent UCI and Samueli School supporter. It is funded by the Samueli Foundation, the Opus Foundation and the UC’s Presidential Match for Endowed Chairs.

The celebratory evening began with current Samueli School Dean Gregory Washington welcoming guests to “the house that Nick built,” a reference to Alexopoulos’s contributions to the approval, formation and funding of Calit2.

UCI Provost Enrique Lavernia, who was on the search committee that appointed Alexopoulos dean in 1997, introduced the guest of honor. Alexopoulos, a member of the National Academy of Engineering and a Highly Cited Researcher, currently serves as vice president for academic programs and university relations at the Broadcom Foundation.

As part of the celebration, Alexopoulos delivered a lecture. “Spiraling Through Space and Time: A Journey from Prehistoric Times to Modern High-tech Applications” traced the history of the spiral, which Alexopoulos calls “nature’s signature,” its representation in all aspects of life on earth, including symbolism in life, death and rebirth, as well as its modern applications. He also discussed mathematical representations of spiral shapes and the application of this knowledge to the design of antennas for wireless communication, as well as the ways in which spiral design influences modern architecture.

“Nick is the greatest dean our school has ever had,” Washington told those in attendance. “His impact has affected most of the faculty in this room, and if anybody in the history of this school deserves this honor, it is Nick and Sue Alexopoulos.”