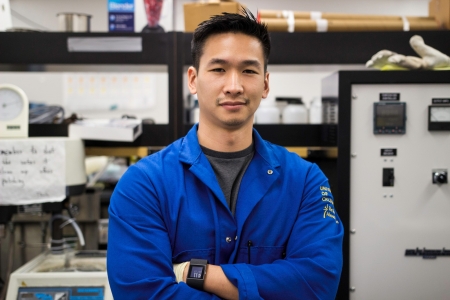 May 4, 2016 - David Kok, a second-year doctoral student in materials science and engineering, has been awarded the National Defense Science and Engineering Graduate (NDSEG) Fellowship. The three-year award is offered by the Department of Defense to individuals who have demonstrated the ability and special aptitude for advanced training in science and engineering.

Kok is a former Marine and community college student who participated in UC Irvine’s STEM Summer Bridge program where he was exposed to research for the first time while working on a project in the lab of Professor Martha Mecartney. He earned a bachelor’s degree in chemistry from Cal Poly Pomona in 2014 and returned to UCI for his Ph.D.

“This is an energy and cost-saving measure to produce a final dense ceramic product,” explains Kok.

“I am justifiably proud of David’s demonstrated potential that led to this award,” says Mecartney, Kok’s Ph.D. adviser. “He started in our laboratory as a community college student from Mt. SAC, and now his research has won him this outstanding fellowship.”

Approximately 200 graduate fellowships are awarded nationally by NDSEG, each for three years and a stipend of $34,000 per year plus tuition and fees.