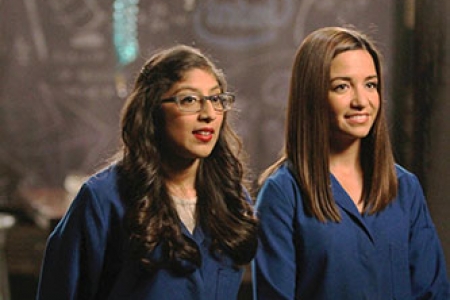 April 18, 2016 – Samueli School students Nicole Mendoza and Kimberly Veliz haven’t plotted strategy on a desert island, served as apprentices for industry moguls or belted out songs in blind auditions. But they are reality TV stars nonetheless.

United Artist CEO Mark Burnett, the producer behind mega-hits like “Survivor,” “Shark Tank,” “The Apprentice” and “The Voice,” now has launched “America’s Greatest Makers,” and Mendoza and Veliz are working their way toward the grand prize.

The weekly show debuted on TBS April 5 along with an interactive online component. It pits teams of inventors against each other to develop the next big thing in wearable technology and smart connected devices, and seems a natural fit for graduate student Mendoza and Veliz, an undergraduate. The two have been working together in the lab of UC Irvine biomedical engineering professor Michelle Khine to develop sensor-based wearables that can measure the body’s physiological signals.

The duo, called Team Slapband, made it onto the show with an activity-tracker device that measures blood pressure. The device’s sensors are built into a flexible wristband, which users don by slapping it against their wrist. They were one of 24 initial teams selected by the show to present their project to a panel of four celebrity judges, and one of only 15 teams chosen to move forward.

“Heart disease kills more people around the world than any other disease,” Mendoza told the judges on the series opener. Known as the “silent killer,” high blood pressure can result in heart attack, stroke or organ damage. And there is no device yet on the market that can continuously measure this vital sign. “The blood pressure cuff hasn’t [changed] in 100 years,” Veliz added.

The next step for Team Slapband is the “Make it or Break it” elimination rounds, which begin tomorrow night. For the next five weeks, three teams will compete each week for $100,000 and a spot in the finals, where the five remaining teams will vie for the $1 million grand prize. In addition to winning the America’s Greatest Maker crown, the last team standing will benefit from program co-sponsor and chip maker Intel’s technology resources and partnerships, as it continues toward product commercialization.

Mendoza and Veliz’s slapband derived from their research into flexible polymer biosensors that conform to the wearer’s skin. The sensors can be adapted for different applications, says Mendoza, including monitoring temperature, respiration, heart rate and glucose levels. They also can track fetal movement – the basis for Tiny Kicks, a startup that originated in the lab last year. For “America’s Greatest Makers,” though, the two students decided to stick with the blood pressure-tracking system.

The show requires that each team use Intel’s Curie module in its invention. The technology – Mendoza calls it “really cool” – is a button-sized system-on-a-chip with the capabilities of a full computer, including Bluetooth, motion sensors, low-energy radio, battery charging and pattern-matching capabilities. “It has lots of features you’d want for a wearable product,” she says. The team has developed algorithms that extract blood pressure and heart rate information from the sensor data; the device sends that information through an app to the user’s smart phone or directly to his or her doctor.

Any prize money Team Slapband might win – they’re not yet at liberty to discuss the show’s outcome – will be used to advance their product. “We would really need that million dollars to commercialize this,” Mendoza says.

Mendoza and Veliz, who met through their participation in UCI’s Minority Science Program, both are first-generation college students who credit their families, at least in part, for their success. “My parents always told me, ‘Education is how you’re going to achieve the American dream,’” Veliz said in an online interview with the show’s host. She is the oldest of three siblings, whose parents immigrated to the U.S., and the first to attend college.

Regardless of whether they’re ultimately crowned America’s Greatest Makers, both students say their participation on the series has been life-changing. “I never thought of being an entrepreneur until now,” says Veliz. “Being a part of this shows you that taking research to another level – getting it out there to the public – is actually just as important as doing the research in an institution.”

“We definitely got exposed to different aspects that we don’t get doing research,” adds Mendoza. “Michelle Khine’s lab is actually very entrepreneurial, so those experiences, along with the show’s experiences, really drove me to develop a passion for the startup world and for bringing new technologies to the public.”

“As Nicole and Kim's advisor, I am very proud of both of them,” Khine says. “They are fantastic makers as well as incredible role models for girls in STEM. The vital sensors we are developing hopefully will be changing the paradigm of how medicine is practiced, so we can move from reactive to proactive.”

That goal is the inspiration for Mendoza and Veliz as well. “I really think that medical devices are going to go from the doctors’ offices more into people’s homes and daily lives,” Mendoza says. “The slapband was our cool idea but the biosensors themselves are what we really want to market. Hopefully we can make those available for other wearables as well.”