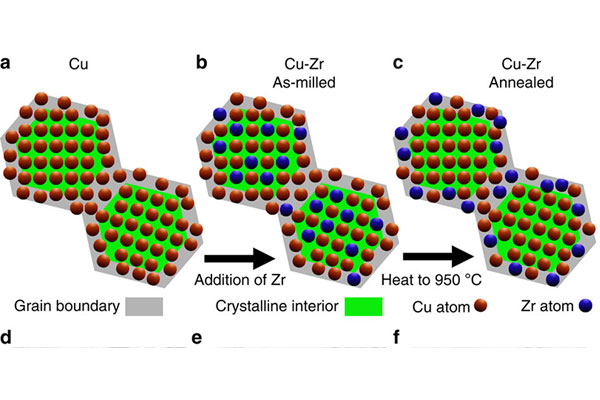 Feb. 18, 2016 - In the world of materials engineering, a well-known tradeoff exists between strength and ductility (the ability of a material to stretch and bend). Engineers historically have had to choose between using strong, yet brittle materials (ceramic or high-strength steel, for example) or more ductile materials (like copper wire), which lack strength but are far more likely to deform without shattering.

Now, research conducted in the lab of UC Irvine mechanical and aerospace engineer Tim Rupert is changing that paradigm. In a paper published today in Nature Communications, Rupert and colleagues describe a new type of material that is both super-strong and highly ductile. The material is a copper zirconium alloy that combines nanocrystals with interface doping, the addition of elements that change the way those crystals interact at the material’s grain boundaries.

Scientists have been experimenting with nanocrystals and grain boundaries (the area where a material’s crystals meet) for nearly 25 years. Because nanocrystals are so much smaller than traditional micron-sized crystals, they yield many more grain boundaries in their respective materials, correlating to more strength. While this reduction in crystal size has led to increasingly stronger materials, it has not had any effect on the tradeoff between strength and ductility.

By adding zirconium to ordinary copper, however, heating it up and then cooling it quickly, UCI researchers discovered the resulting material incorporated nanocrystals that acted differently at their many grain boundaries than they did without the zirconium. Instead of lining up in an ordered pattern, the atoms were now disordered, with the zirconium atoms moving to the grain boundaries and displaying different structures or chemistries. This segregation of the zirconium atoms to the interfaces leads to new properties, including increased ductility in the material, without affecting the high degree of strength.

“It turns out that structural disorder at the boundary is a beneficial feature,” Rupert says. “By changing what’s happening at the interface where the grains meet, we’ve engineered the material to gain much better properties.”

The process is known as implementing “complexions” at the grain boundaries. The result is an amorphous intergranular film (AIF), which can be duplicated in almost any material. The trick is determining which doping element will have the desired result on a specific material. But the copper zirconium example has provided an important proof of concept. “Zirconium was a good choice for copper; it wouldn’t necessarily be a good choice for all other metals,” Rupert explains.

In addition to changing materials’ structural properties, the technique also can be used to alter other properties, such as the way the material transports heat, absorbs energy or tolerates radiation. This can have important implications in a wide range of applications, including hydrogen storage and nuclear reactors.

“We have developed a technique for combining nanostructuring with recent advances in complexion engineering –  the ability to ‘fine-tune’ interface structure,” Rupert says. “This complementary materials-design strategy allows for unprecedented property combinations, and this new class of materials will enable novel technologies and allow for extraordinarily efficient engineering design.”

Rupert’s former doctoral student, Amirhossein Khalajhedayati, is the first author on the paper. “From the very beginning of our research, we believed that if we could implement complexions at the interface of nanocrystalline materials, novel material properties should emerge,” Khalajhedayati says. “Substantial increase in the ductility of nanocrystalline copper is an example of the benefits that can be gained through this technique.”

The next goal in the research, which is funded by the U.S. Army Research Office, is to further optimize the doped material’s properties. Rupert and his team are experimenting with mixing three elements to produce thicker AIFs and further emphasize property improvements.

Additionally, the process is scalable, meaning it easily can be used to produce large-batch materials. “There are lots of cool things people can do with materials but they’re often limited to proof of concept,” Rupert says. “We’re not limited to that; it’s more important to show you can tune the nanoscale features because getting it pressed into a bigger piece is actually pretty simple.”

Khalajhedayati believes the research “brings us one huge step closer” to implementing nanocrystalline materials in a wide variety of engineering applications including aerospace, defense, automotive and biotechnology.