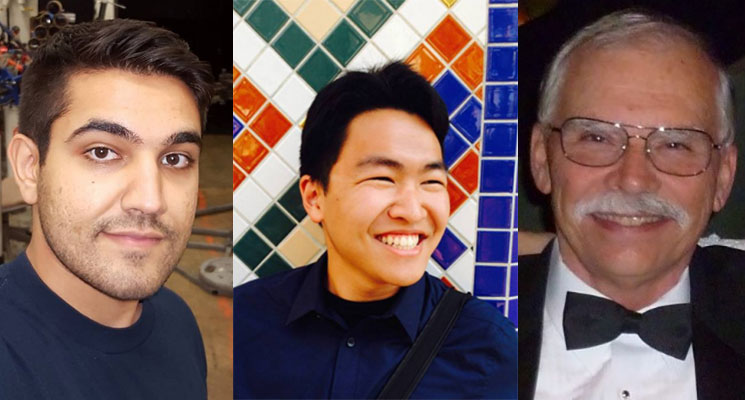 Feb. 24, 2016 - Two mechanical and aerospace engineering students and one staff member are being honored by the Orange County Engineering Council in recognition of their accomplishments.

Mehrzai, an active member of the UC Irvine Anteater Racing Team, has served the team as suspension team lead and program manager. In the 2015 SAE competition season, he led eight students in the team’s design, manufacture and development of its internal combustion car’s suspension system. He currently leads 90 students developing four high-performance vehicles, and also serves as an undergraduate teaching assistant for three racecar engineering courses.

Quan, president of UCI’s ASME (American Society of Mechanical Engineers) student chapter, has worked to strengthen collaborations within the local mechanical engineering community. He collaborates with ASME’s Orange County Section to organize events, including resume workshops, lab tours, programming tutorials and other programs. According to MAE Professor J.M. McCarthy, Quan also “excelled in his efforts to design and construct a unique walking robotic system” as part of his robotics research.

Smith has worked for more than 10 years to advance UCI’s racecar engineering program. Along with McCarthy, he created and has managed the UCI Energy Invitational, in which cars compete for the best balance of performance and efficiency. Smith also has served as head safety steward of the energy invitational and as a Formula SAE California design judge.

McCarthy, who has worked closely with all three award winners, lauds their achievements. Of Mehrzai, he says, “Nawid’s leadership, communication skills, attention to detail and calm demeanor is keeping our race team on track for a remarkably successful year.”

He calls Quan “an outstanding leader” and an “excellent researcher” who has a bright future ahead of him; and commends Smith for his “outstanding engineering education skill,” crediting him with the race team’s improvement in quality and number of vehicles under development. “Smith is an inspiration and an amazing resource,” McCarthy adds.

Mehrzai, Quan and Smith will receive their awards on Saturday, Feb. 27, at OCEC’s Honors and Awards Banquet, to be held in Anaheim to coincide with Engineering Week.