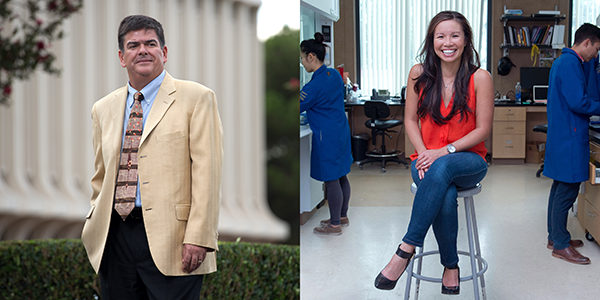 Dec. 14, 2016 - UC Irvine engineering professors Michelle Khine and Enrique Lavernia have been named fellows of the National Academy of Inventors for 2016. The distinction is awarded to academics who’ve demonstrated a prolific spirit of innovation with outstanding inventions that have made a tangible impact on quality of life, economic development and the welfare of society.

Lavernia is UCI’s provost and executive vice chancellor and Distinguished Professor of chemical engineering & materials science. His research interests include the synthesis and behavior of nanostructured and multiscale materials, with particular emphasis on processing fundamentals and physical behavior, and his work has led to 12 patents (two pending). A professor of biomedical engineering, Khine has developed low-cost, manufacturable approaches to micro- and nanotechnologies for diagnostics, drug discovery and wear. She was the scientific founder of Fluxion Biosciences, Shrink Nanotechnologies, Novoheart and, most recently, TinyKicks. Khine won MIT Technology Review‘s TR35 award in 2009 and was named one of Forbes magazine’s “10 Revolutionaries” in 2009 and one of Fast Company magazine’s “100 Most Creative People in Business” in 2011.

There are now 757 NAI fellows, representing 229 research universities and governmental and nonprofit research institutes. Lavernia and Khine are the fourth and fifth UCI NAI fellows. They will be inducted on April 6, 2017, as part of the Sixth Annual Conference of the National Academy of Inventors in Boston.