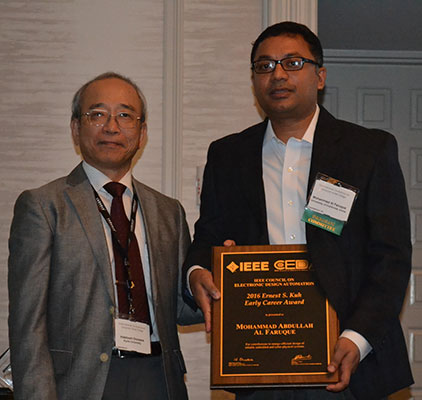 Nov. 8, 2016 - Mohammad Al Faruque, Samueli School electrical engineering and computer science assistant professor, has added yet another research award to his growing collection. This week he accepted the Ernest S. Kuh Early Career Award from the IEEE Council on Electronic Design Automation (CEDA) in a ceremony in Austin, Tex. The award honors one individual per year in the early stages of his/her career who has made innovative and substantial technical contributions to the area of electronic design automation. Al Faruque, who was honored for his contributions to energy-efficient design of reliable embedded and cyberphysical systems, is the only University of California researcher to have received the award since its inception in 2009.

Last week, he received the 2016 Thomas Alva Edison Patent Award from the Research and Development Council of New Jersey. He has also recently won the 2016 DATE Best Paper Award, the 2015 DAC Best Paper Award and the 2016 NDSS Distinguished Poster Award.

“This is the most significant award in my career, and I am humbled and honored to be the recipient,” Al Faruque said. “This is an honor for me that the importance of my work in the area of design automation of cyberphysical systems has been recognized by the community.”