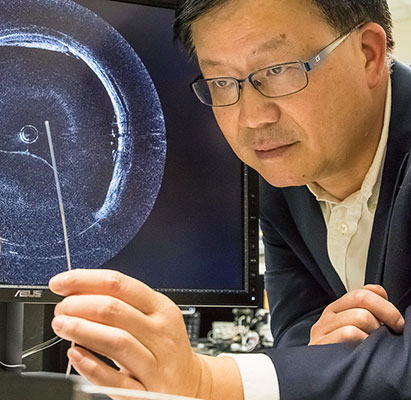 Dec. 21, 2015 - UC Irvine biomedical engineering professor Zhongping Chen has developed a minimally-invasive, dual-modality imaging device that can effectively examine arteries for signs of vascular disease. After several years of work, his team’s newest effort, an ultrafast device that utilizes both optical and ultrasonic techniques along with a miniaturized catheter, has proven it can rapidly provide volumetric mapping of plaques and clearly identify those that are vulnerable to rupture. The research was published last week in Scientific Reports.

Nearly half of all deaths in Europe and the United States are caused by atherosclerosis, a hardening and narrowing of the arteries. This progressive disease imperils blood flow and causes heart attacks, strokes and other cardiovascular disease.

Current artery imaging utilizes sound and/or light to examine tissue. Ultrasound waves can penetrate deep into vascular tissue but don’t afford high resolution or sensitivity. Optical coherence tomography (OCT), on the other hand, uses near-infrared light waves, which produce cross-sectional images with ultra-high spatial resolution, so it can detect thin fibrous caps and other dangerous plaque characteristics. But it can’t go very deep – only about two millimeters. Plaque can be twice as thick as that, Chen says, so OCT can’t quantify plaque volume and lipid/necrotic core size.

But Chen’s research group has taken arterial imaging to a new level. By combining the two modalities into an ultrafast system that uses a single miniaturized catheter, they were able to effectively image and characterize atherosclerotic plaques in vivo.

The benefits of integrating the technologies into a single probe are numerous. Since the probe is inserted through the femoral artery, a single device eliminates the need to insert multiple probes separately for each test. “Doing two or three procedures is not only more expensive, uncomfortable and time-consuming,” says Chen, but more importantly it’s difficult to match the tissue [to be sure the same tissue is being imaged for each test], a process known as co-registration. “When you use one probe, you don’t have to worry about matching tissue, which enables physicians to look at co-registered ultrasound and OCT images simultaneously in real time.”

Additionally, the new device could reduce patient side effects, including renal dysfunction and other effects of X-rays caused by the angiography needed to insert the probe. “Using only one catheter and only having to navigate it once can save all those side effects,” Chen says. “This approach is cheaper, less invasive and more sensitive, and it reduces physician time.”

The team’s multimodality imaging device was tested in the abdominal aortas of both live, healthy rabbits and atherosclerotic rabbits, whose abdominal aortas are similar to human coronary arteries. The team also imaged 50 human coronary arteries from cadavers, and characterized the plaques. Results indicated that integrating the two complementary techniques permitted accurate evaluation and characterization of plaque vulnerability.

“The ultimate goal is to catch all people with vulnerable plaque, to save lives,” Chen says.