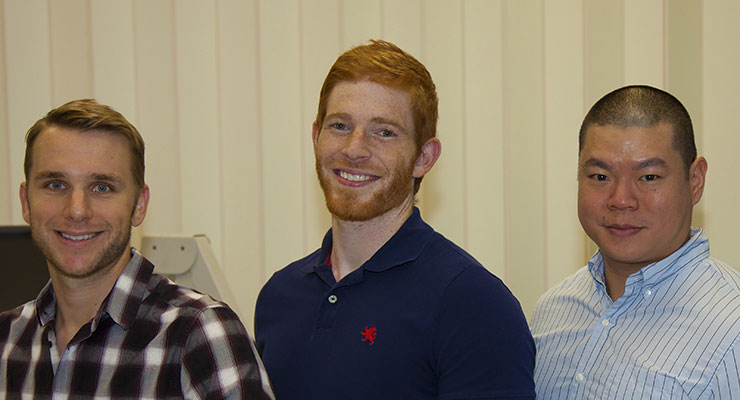 Dec. 16, 2015 - A medical device company cofounded by two biomedical engineering alumni was one of three runners-up in a UC-wide entrepreneurial competition held this month in San Francisco. The primeUC competition, open to fledgling life-science companies across the 10-campus system, awarded a total of $300,000 in seed funding. The winners were selected by a panel of 50 judges from a field of more than 260 entries.

UCI’s Laser Associated Sciences (LAS), a startup developing optical technologies to improve diagnosis, treatment and monitoring of patients with vascular disease, was one of 20 finalists. Each was invited to make pitches to the judges at the Dec. 2 competition. LAS was selected as one of three runner-up companies to receive $50,000 in prize money provided by Johnson & Johnson Innovation. The grand prize winner, UCLA startup Spinal Singularity, won $150,000 to develop and market a smart catheter for patients with paralysis and neurogenic bladder dysfunction.

Biomedical engineering doctoral alumni Sean White and Bruce Yang, along with physics alumnus Tyler Rice, founded LAS after working together in the Beckman Laser Center during their doctoral studies.

“The three of us worked with a lot of imaging equipment at BLI that required several Ph.D.s in the room just to operate it,” White says. “This was bleeding-edge technology, but making it accessible to literally anyone else was, in our mind, critical to developing something which could be widely adopted in a hospital setting.”

The fledgling company’s flagship product, FlowMet, is a clip-on device that continuously measures blood flow in a patient’s fingers and toes.

The product is aimed at improving outcomes in patients with peripheral artery disease, in which blockages in the arteries result in restricted blood flow to the legs. According to White, 30 percent of the 10 million Americans with this condition will die in the next five years.

The condition is treated most often with angioplasty – insertion of a balloon on a catheter – to open up the blockage, but White says doctors often have to guess at whether enough blood flow is restored to a limb. FlowMet’s real-time surgical monitoring capability takes the guesswork out of surgery. Product testing has shown it can simplify disease detection, provide real-time surgical feedback and reduce unnecessary follow-up visits through at-home monitoring.

“Because the three of us all studied blood flow in one form or another in grad school, we were somewhat familiar with some of the problems that clinicians were having in this space,” White says.

The company, which also won the Merage School Business Plan Competition in 2013 and was a finalist at the Chapman University California Dreamin’ competition, is incubating at the Beckman Laser Center. All of its current funding has come from prize money won at competitions and from the principals’ own bank accounts.

“There is nothing like reaching into your own wallet to pay for equipment to motivate you to design a cost-effective product,” says White, who adds: “The three of us spend pretty much every free minute we have working on the company.”

The primeUC competition was developed to help entrepreneurs move their early-stage companies into the marketplace. Judged by angel investors, venture capitalists and corporate executives, the competition was hosted by QB3, a UC research institute located at UC San Francisco.