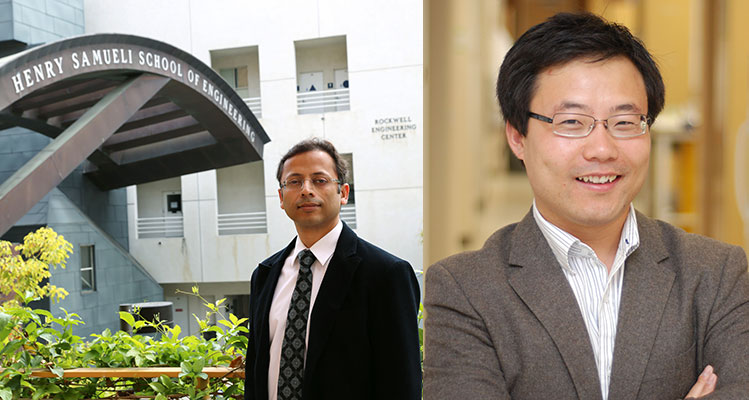 Jafar, professor of electrical engineering and computer science and an internationally renowned researcher who has greatly improved understanding of wireless network capacity, received the 2015-16 Distinguished Mid-Career Faculty Award for Research. The award, the campus’s top research honor for mid-career faculty, is bestowed on only one UCI faculty member per year. It recognizes those who have made outstanding contributions through their research.

Jafar’s work explores the fundamental performance limits of wireless communication networks, including a concept called interference alignment, which demonstrates that data rates are not limited by the number of devices sharing the radio frequency spectrum.

The 11-year UCI educator and researcher is no stranger to academic accolades. Most recently, he won the 2015 Blavatnik National Award for Young Scientists in physical sciences & engineering, one of only three winners selected from prestigious American universities and research institutions.

He was also listed this year as among the top 1 percent of scientific researchers in the world, according to the 2015 Highly Cited Researchers list produced by Thomson Reuters. The list, which encompasses 3,000 scholars in 21 fields of science and social sciences who demonstrate great influence as measured by citations to their work, includes less than one-half of one percent of all published researchers. Last year, he was named by ScienceWatch as among the World’s Most Influential Scientific Minds, and also was named an IEEE Fellow.

Additionally, Jafar, who earned his doctorate in electrical engineering from Stanford University, received the NSF CAREER award in 2006, the Office of Naval Research Young Investigator award in 2008, and both the Maseeh Outstanding Research Award (2010) and the Mid-Career Excellence in Research Award (2015) from the Samueli School of Engineering. He also received the UCI EECS Professor of the Year award five times from the Engineering Student Council, and the engineering school’s Teaching Excellence Award in 2012.

“Over the course of my time as a faculty here, I have experienced a growing sense of attachment, not only to the wonderful students and colleagues in my own department but also to the UCI campus as a whole,” Jafar said. “To be recognized at the campus level through
one of the UCI Academic Senate’s highest honors is therefore something I cherish very much.”

Weian Zhao, assistant professor of pharmaceutical sciences and biomedical engineering, received the 2015-16 Distinguished Assistant Professor Award for Research. It too is awarded to only one (assistant professor) per year in recognition of outstanding research.

Zhao’s work aims to elucidate and eventually control the fate of transplanted stem cells and to develop novel miniaturized devices for disease diagnosis and monitoring.

Zhao, founder of Velox Biosystems, a startup company that seeks to develop rapid diagnostic technology, also leads UCI’s effort in the Drug, Device, Discovery and Development component of the University of California’s UC BRAID (Biomedical Research Acceleration, integration and Development). His work has been published in journals including Nature Communications, Nature Nanotechnology, PNAS, Blood, Neurology, Biomaterials, Lab on a Chip, JACS, Advanced Materials, and Angewandte Chemie (published by the German Chemical Society). He is the recipient of numerous awards, including MIT’s Technology Review TR35 Award and the NIH Director’s New Innovator Award.

Zhao earned his doctorate in chemistry at McMaster University and was a Human Frontier Science Program (HFSP) postdoctoral Fellow at Harvard Medical School, Brigham and Women’s Hospital and MIT. An associate editor of Frontiers in Molecular Diagnostics, he serves on editorial boards of the journals Stem Cell International and Interface Focus.

“This is a great honor,” Zhao said of his Academic Senate award. “It recognizes the importance of our collaborative and interdisciplinary approaches to tackling some of the biggest challenges in medicine."

Samueli School Dean Gregory Washington praised Jafar’s and Zhao’s achievements. “Wireless carriers will dramatically change the operation and configuration of their networks based on Syed’s work,” Washington said, “and Weian is making groundbreaking strides in the ability to diagnose and monitor disease. They are both extremely worthy recipients of these awards, and all of us at the Samueli School are proud of their many accomplishments.”