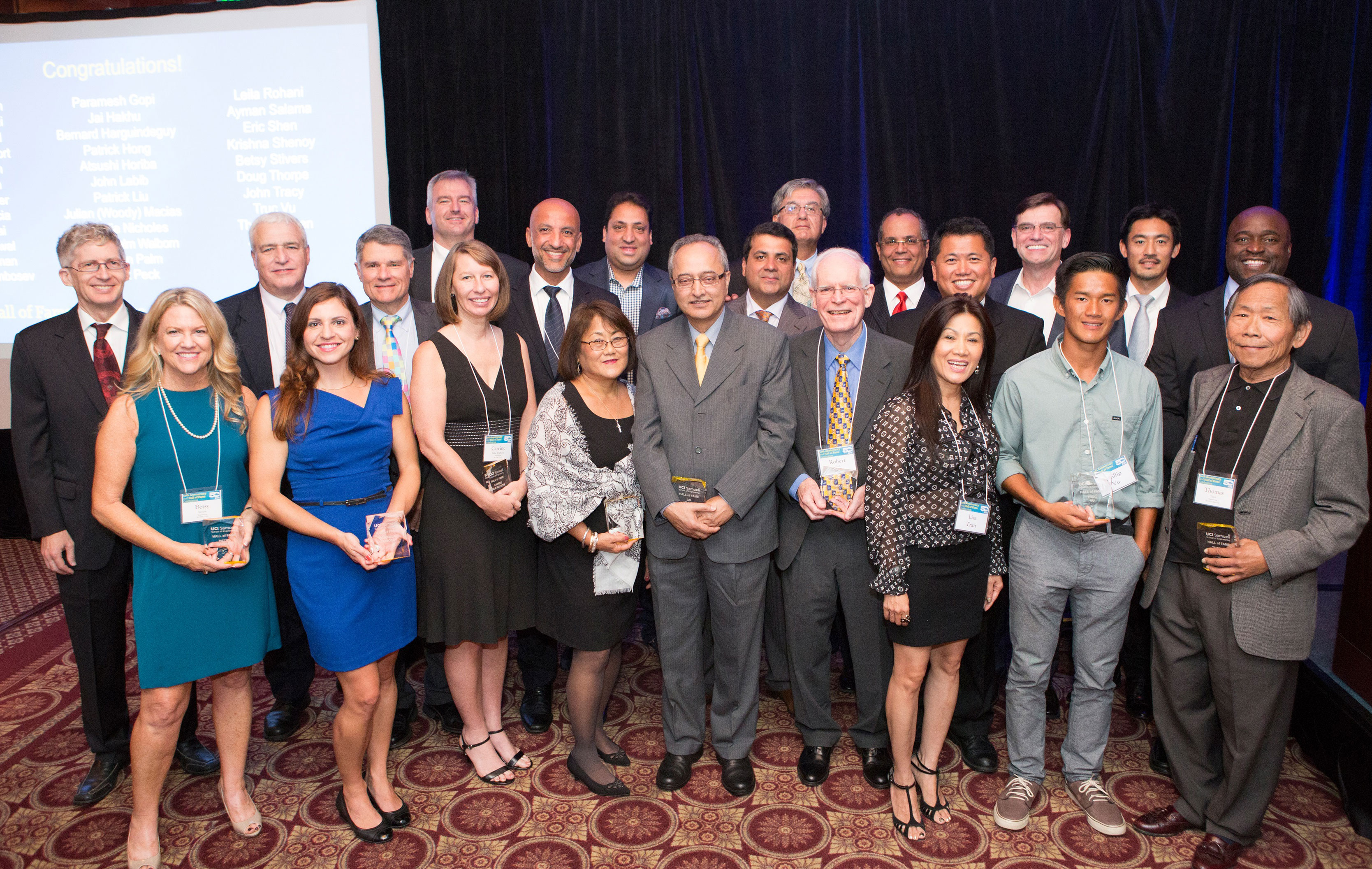 Oct. 9, 2015 - More than 400 alumni, faculty, donors and industry partners turned out for the 50th Anniversary and Hall of Fame Celebration last weekend, as 54  alumni were inducted into the 2015 Hall of Fame for the UC Irvine Samueli School of Engineering and Donald Bren School of Information and Computer Sciences.

Held Oct. 3, 2015, at the Radisson Hotel in Newport Beach, the event included a festive cocktail reception and dinner, with guests sharing their UCI memories with each other, on notecards and via video in a photo booth.

Allen Stubberud, who served as dean from 1978-1983, noted that a lot has changed at UCI’s engineering school. “The school is much more advanced than when I was dean,” he said. “When I started as dean in 1978 there were 14 faculty members, and a lot of our courses were taught by people from industry; lecturers. We couldn’t have done it without them.”

Both deans noted the improvement in rankings for UCI, and for the individual schools. “The value of your degree has never been worth more than it is today,” said Washington. “This is not a testament to us, but a testament to you and the impact you have had on the community and the world.”

“We had several purposes in mind when we created this event,” said Stern. “One is to celebrate the university’s 50th anniversary and as many years of research and innovation at our schools, but also to kick off the inaugural Hall of Fame, honoring our alumni and their accomplishments.”

Each of the deans announced and congratulated their inductees: 20 in ICS and 34 in engineering.

One of the inductees, ICS alumnus Jack Ringquist ’82, who is the global sector leader in consumer products at Deloitte, told the audience that the university made a tremendous difference in his life. He was lucky to get a scholarship, he said, and when he first came to campus in 1978, he felt right at home.

“There was this great park in the middle, a string of futuristic buildings around it, but most importantly to me, a Frisbee golf course right in the center,” Ringquist said.

He remembers taking ICS 1 with Professor Julian Feldman. It was so difficult that at the end of 10 weeks, he contemplated transferring to Cal State Long Beach and majoring in physical education. “But Feldman challenged me, gave me courage to stick it out, and from there forward, I had the opportunity to work with people like George Leuker, Lubomir Bic and a tremendous professor, Peter Freeman, who talked about the impact of information and technology on society. Which today are all things I apply every day in the work that I do helping companies, large organizations and NGOs deal with some of the biggest issues and problems that society faces. How can they leverage technology and information as an enabler to come up with solutions that we never would have imagined 10 or 20 years ago? It’s been a fascinating career.”

Marinela Gombosev ’05, was the youngest engineering inductee. After earning a degree in electrical engineering, she went on to earn an MBA at Pepperdine and now works as executive vice president of operations and marketing at Evoke Neurosciences. She said that her engineering education taught her how to be a problem-solver; to be able to figure things out for herself. “UCI also taught me how to be a leader. I was president of the Society of Women Engineers.”

Brother and sister inductees Stephen Palm ’87 (electrical engineering) and Carrine Palm Walborn ’96 (civil engineering) both attended the event. “My experiences here in the school of engineering at UCI helped propel me forward in all my careers,” Walborn told the audience. “It’s had a big impact on me and I’m truly grateful that I got to be a part of this school. I hope with this Hall of Fame, we can be an inspiration to other people and to future generations.”

After all of the Hall of Fame inductees were acknowledged, Washington led the whole room in the traditional Anteater cheer: Zot, Zot, Zot! And then he closed the program with a toast, “From Hal and I –  to our schools’ 50 years of excellence, 50 years of accomplishment from all of you, and we wish you 50 more.”