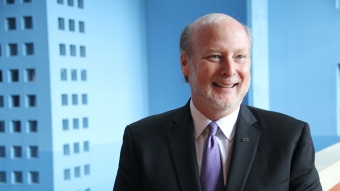 The University of California Board of Regents today (Sept. 18) approved President Janet Napolitano’s selection of Howard Gillman, Ph.D., as the sixth chancellor of UC Irvine.

Gillman, UC Irvine provost and executive vice chancellor for the past year and interim chancellor since July 1, leads a campus with more than 29,000 undergraduate and graduate students, 1,100 faculty and 9,400 staff. Consistently ranked among the nation’s best universities, it is a major intellectual and cultural center that generates an annual economic impact of $4.4 billion in Orange County, and provides medical care as the county’s only academic medical center.

A seasoned university academic leader and accomplished fundraiser, Gillman, 55, is a nationally recognized expert on constitutional studies and judicial politics. He has authored or co-authored seven books and dozens of articles, and has received several awards for teaching.

He succeeds Michael V. Drake, M.D., who became president of the Ohio State University on July 1.

“Howard Gillman has all that it takes — a record of leadership, scholarship and fundraising skills — to lead this vital campus,” said Napolitano, who named him as her choice for the chancellor position on Sept. 4. “UCI faculty members serve students and the larger community through outstanding teaching, research and public service. And its medical center meets health needs day in and day out.”

Regents Chairman Bruce D. Varner noted that Gillman emerged as the top candidate after a national search that attracted 405 applicants.

“Strong leadership is central to the excellence of each of our 10 campuses,” Varner said. “Chancellor Gillman has demonstrated he has the leadership attributes, the vision and the dedication to public service needed to move UC Irvine forward with vigor and integrity.”

Gillman, a professor of political science, history and law, was appointed provost and executive vice chancellor in June 2013. He has served since then as the chief academic and operating officer, working closely with UCI’s five vice chancellors, 12 deans, the university librarian, Academic Senate leadership and the chief executive officer of the UC Irvine Medical Center.

In addition to leading strategic planning and the implementation of campus initiatives as provost, Gillman worked with deans to recruit and retain faculty. During the past year, 28 percent of new faculty members were members of under-represented groups.

“I am honored and humbled by this vote of confidence in me, to lead UC Irvine as its sixth chancellor,” Gillman said in remarks to the regents. “There is no greater force for the advancement of human progress and enlightenment than the modern research university, and no more important institution serving our democracy than public research universities.”

“My experiences this past year,” Gillman said, “convince me that UCI is poised to rise higher in the ranks of those global institutions of higher education whose pre-eminence is undisputed because they are viewed as making the very best and most important contributions to knowledge creation, education, arts and culture, clinical and professional practice, and human well-being. Over the coming months I will be working with the members of our community to forge a path toward increased excellence and impact.”

Born in Southern California, Gillman grew up in the San Fernando Valley, and was the first in his family to go to college. He earned bachelor’s, master’s and doctoral degrees at UCLA. His wife, Ellen Ruskin-Gillman, Ph.D., earned her master’s degree and doctorate in psychology at UCLA after graduation from UC San Diego with a bachelor’s degree. They have two children.

Before his appointment as provost, Gillman served for five years as dean of the University of Southern California’s Dornsife College of Letters, Arts and Science. He oversaw 33 academic departments, dozens of research centers and institutes, 7,000 undergraduates, 1,200 Ph.D. students and nearly 800 faculty members across the humanities, social sciences, and physical, biological and natural sciences. He was a professor of political science, history and law at USC, and was awarded the university’s top award for excellence in teaching.

The Board of Regents approved a base salary of $485,000, plus an annual automobile allowance of $8,916. Gillman will live in a university-provided house suitable for community engagement and fundraising. His total cash compensation ranks in the bottom third among chancellors and presidents of the 62 public research universities that are part of the Association of American Universities.

-University of California Office of the President