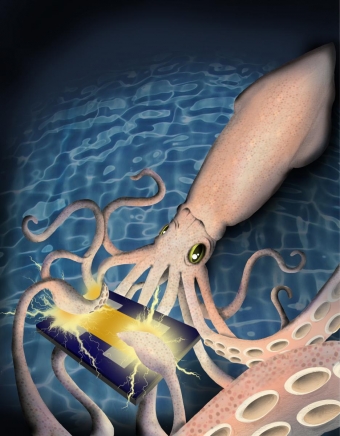 uid (Loliginidae) may hold the key to a new generation of medical technologies that could communicate more directly with the human body. UC Irvine materials science researchers have discovered that reflectin, a protein in the tentacled creature’s skin, can conduct positive electrical charges, or protons, making it a promising material for building biologically inspired devices.

Currently, products such as retinal implants, nerve stimulators and pacemakers rely on electrons – particles with negative charges – to transmit diagnosis data or to treat medical conditions. Living organisms use protons, with positive charges, or ions, which are atoms that contain both electrons and protons, to send such signals. The UCI discovery could lead to better ion- or proton-conducting materials: for instance, next-generation implants that could relay electrical messages to the nervous system to monitor or interfere with the progression of disease.

Alon Gorodetsky, assistant professor of chemical engineering & materials science at The Henry Samueli School of Engineering, led the research team. “Nature is really good at doing certain things that we sometimes find incredibly difficult,” he said. “Perhaps nature has already optimized reflectin to conduct protons, so we can learn from this protein and take advantage of natural design principles.”

He and his group have been studying reflectin to discern how it enables squid to change color and reflect light. They produced the squid protein in common bacteria and used it to make thin films on a silicon substrate. Via metal electrodes that contacted the film, the researchers observed the relationship between current and voltage under various conditions. Reflectin transported protons, they found, nearly as effectively as many of the best artificial materials.

Gorodetsky believes reflectin has several advantages for biological electronics. Because it’s a soft biomaterial, reflectin can conform to flexible surfaces, and it may be less likely to be rejected by the human body. In addition, protein engineering principles could be utilized to modify reflectin for very specific purposes and to allow the protein to decompose when no longer needed.

“We plan to use reflectin as a template for the development of improved ion- and proton-conducting materials,” Gorodetsky said. “We hope to evolve this protein for optimum functionality in specific devices – such as transistors used for interfacing with neural cells – similar to how proteins evolve for specific tasks in nature.”