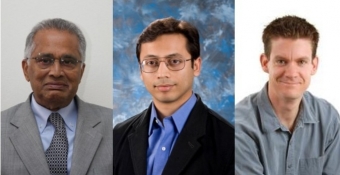 June 25, 2015 - Three Samueli School engineering professors – Satya Atluri, Syed A. Jafar and Matt Law – have been recognized as among the world’s leading scientific minds, according to the 2014 Highly Cited Researchers list published by Thomson Reuters. The list of highly cited scholars includes preeminent researchers in 21 fields of the sciences and social sciences who have demonstrated great influence in their field as measured by citations to their work. This list is based on papers published during the 11-year period 2002-2012. Researchers are selected not only for total citations but also for the number of highly cited papers contributed. When one researcher cites another’s work, he/she is acknowledging the relevance of that work to the current study. Fewer than one-half of one percent of all published researchers are included in the listing.

Satya Atluri, a Distinguished Professor in mechanical and aerospace engineering and director of the Center for Aerospace Research and Education, conducts groundbreaking mathematical work, including inventing the so-called “meshless method” that has aided the design of safer materials for aircraft. Throughout his career, his work has encompassed theoretical, applied and computational mechanics of solids and fluids; and structural longevity, failure prevention and health management. Atluri most recently received India’s Padma Bhushan award “for distinguished service of high order in the field of engineering and science.”

Syed Jafar, an associate professor in electrical engineering and computer science, analyzes the capacity of wireless communication networks. In addition to his earlier work on multiple antenna (MIMO) technology and cognitive radio, Jafar is best known for his seminal work on the idea known as interference alignment, in which he shows how a resource such as bandwidth in a network can be shared among competing users in such a manner that each user gets half of the total bandwidth free from interference from others. Jafar and his first year Ph.D. student Viveck Cadambe were among the youngest researchers ever to win the prestigious IEEE Information Theory Society Paper Award, and interference alignment has since been recognized as one of the "Top Topics" and as a "Fast Moving Research Front" by Sciencewatch in 2011.

Matt Law, an assistant professor of chemistry who holds a joint appointment in chemical engineering and materials science, develops new nanoscale and Earth-abundant materials for producing electricity and chemical fuels from sunlight. Law’s current research interests include quantum dot solar cells, the physics of metal sulfide semiconductors, and devices that split water into hydrogen and oxygen.