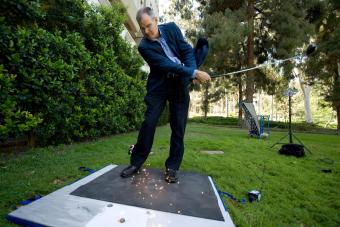 Titanium alloy golf clubs can cause dangerous wildfires, according to UC Irvine scientists. When a club coated with the lightweight metal is swung and strikes a rock, it creates sparks that can heat to more than 3,000 degrees Fahrenheit for long enough to ignite dry foliage, according to findings published recently in the peer-reviewed journal Fire and Materials. Orange County, Calif., fire investigators asked UC Irvine to determine whether such clubs could have caused blazes at Shady Canyon Golf Course in Irvine and Arroyo Trabuco Golf Club in Mission Viejo a few years ago.

“One fire almost reached homes before they stopped it. This unintended hazard could potentially lead to someone’s death,” said Samueli School chemical engineering & materials science professor James Earthman, lead author on the paper. “A very real danger exists, particularly in the Southwest, as long as certain golf clubs remain in use.” He suspected that the titanium heads on some clubs designed for use in “the rough” – natural areas off irrigated fairways – could be to blame for the fires.

Most golf clubs have stainless steel heads. However, a significant number being manufactured or in circulation have a titanium alloy component in the head. Such alloys are 40 percent lighter, which can make the club easier to swing, including when chipping errant balls out of tough spots. In Southern California, those spots are often in flammable scrub brush. The researchers painstakingly re-created in the lab course conditions on the days of the fires. Using high-speed video cameras and powerful scanning electron microscope analysis, they found that when titanium clubs were abraded by striking or grazing hard surfaces, intensely hot sparks flew out of them. In contrast, when standard stainless steel clubs were used, there was no reaction.

“Rocks are often embedded in the ground in these rough areas of dry foliage,” Earthman noted. “When the club strikes a ball, nearby rocks can tear particles of titanium from the sole of the head. Bits of the particle surfaces will react violently with oxygen or nitrogen in the air, and a tremendous amount of heat is produced. The foliage ignites in flames.”