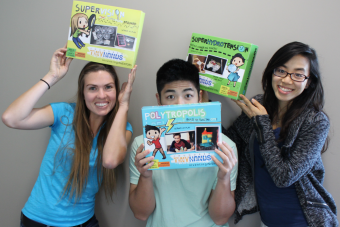 Michelle Khine is known for her playful approach to science. She used a toy – Shrinky Dinks – to invent a method of quickly and cheaply developing custom microfluidic chips for researchers to use in their labs. Now she and her student researchers are inventing toys to inspire kids to not only conduct science, but also become inventors themselves.

The associate professor of biomedical engineering, most recently named one of Fast Company’s Most Creative People in Business 1000, issued a challenge to the graduate students working in her laboratory. “Many of the students in my lab serve as Rocket Science Tutors, so they are working with kids already,” says Khine. “I wanted them to think about how to get children interested in becoming inventors.”

They came up with three ideas for educational toy kits that are “fun, creative, and chock-full of scientific content and ah-ha moments for any child at heart.” Khine and her students formed an academic nonprofit co-op called A Hundred Tiny Hands and have launched a Kickstarter campaign to raise $50,000 to produce the kits. Contributors to the Kickstarter campaign will receive the kits and other fun gifts in return (such as kid-sized lab coats), or they can donate t 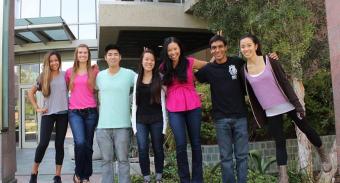 o a school in need and have their donation matched with contributions from Tiny Hands.

Eugene Lee, a doctoral student in biomedical engineering, came up with Polytropolis, a kit that teaches the fundamental concepts of electricity and circuits. “I thought about my own experience of learning about electricity in school,” says Lee. “It was a lot of memorizing equations and only a few demonstrations. It wasn’t until I could play around with making circuits myself did I really understand it.”

With Polytropolis, kids play with conductive and insulating dough to build custom cities or mold figures, then form electrical connections with magnetic snap-together sidewalk pieces to light up LEDs.

The pieces are interchangeable and re-useable, allowing customization of city layouts.

Jolie McLane, a doctoral student in biomedical engineering, created SuperVision, a kit that shows kids how to make their own micro-lenses and attach them to their cellphone, so they can take pictures with up to 50-times magnification. Kids learn about optics while finding the optimal magnification for viewing small items -- the hair on a bug’s leg, perhaps.

With SuperHydro-Tension, Sophia Lin, a doctoral student in chemical engineering, invented a kit that helps kids learn about surface tension and the basic properties of water. Kids can make their own water-repelling tiles and guide water droplets through super-hydrophobic mazes.

Each kit’s packaging features a cartoon character based on the corresponding graduate student and includes a booklet using the character to help children learn the scientific concepts. The idea with the kits is to create a virtual community of young inventors. A Hundred Tiny Hands plans to hold fun challenges – who can build the biggest Polytropolis city with the maximum number of lit up buildings generated from a nine-volt battery? It also intends to encourage kids to upload their own invention ideas, and the graduate students would help them make and produce their own custom kits, including a cartoon character made from their likeness to star as the main character in the booklet and on the box.

With limited funds, the group has had to be resourceful in creating the toys. Lin’s brother, a computer scientist, created the artwork for the kits, and Lee’s cousin’s girlfriend’s parents printed the packaging. RapidTech helped the students with prototypes, testing and design modifications, with a goal of producing a competitively priced end product in a short production-to-market time frame. They’ve lined up local manufacturers and hope to initially be able to produce at le

“We’ve just bootstrapped the whole thing,” says Khine. “These students are serving as incredible role models. They are inventors themselves, publishing papers and applying for patents. Our hope is that they will inspire younger kids to come up with their own ideas for kits to make and sell.”

Their Kickstarter campaign runs through March 26.