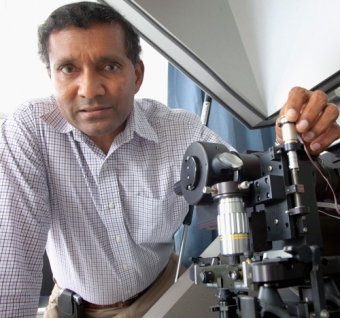 A renowned Samueli School professor and chair has added yet another award to an already impressive collection. H. Kumar Wickramasinghe, The Henry Samueli Endowed Chair in Electrical Engineering and Computer Science and chair of the EECS department, took top honors at this year’s UCI Academic Senate Distinguished Faculty Award Ceremony, held this week at the Newkirk Alumni Center.

Wickramasinghe, who also has joint appointments in biomedical engineering and chemical engineering and materials science, received the Academic Senate’s 2014-15 Distinguished Faculty Award for Research. As the event’s top award recipient, he delivered a lecture at the ceremony on scanning probe microscopy as an enabler for nanotechnology.

Prior to joining UCI, Wickramasinghe, who earned bachelor’s and doctoral degrees at Kings College London, spent most of his career at IBM. He realized early on that new tools would be needed to characterize chips and other devices that were rapidly shrinking beyond what light-based microscopes were capable of seeing. “Almost all the metrology tools at the time were based on visible light,” he says.

The solution was the non-contact atomic force microscope; Wickramasinghe led the team that created the tool and moved it into commercial development. His team also introduced the world to scanning probe microscopes, which measure various chemical and physical properties on the nanoscale.

At UCI, he conducts interdisciplinary research – spanning electrical engineering, physics, chemistry and biology – focused on biotechnological and semiconductor industry applications at the nanometer scale. With an emphasis on the development of instruments that can measure gene expression in living cells and their response to various stimuli, current projects include an all-electronic chip that can amplify and detect minute quantities of DNA for use in point-of-care diagnostics, and a tool that can see chemical reactions at the molecular level.

But it is the Distinguished Faculty Award for Research, selected by the Academic Senate’s Committee on Scholarly Honors and Awards, which Wickramasinghe says means the most to him. “I am truly honored to receive this award and to join a distinguished list of prior awardees.  This award is special, as it represents support for my work from my colleagues at UCI.”

Samueli School Dean Gregory Washington praised Wickramasinghe’s accomplishment. “Kumar’s research has always been innovative and forward-thinking. We’re proud that he represents the Samueli School and that the UCI Academic Senate recognizes the value of his work and selected him for this notable award.”