An undergraduate mentoring program sponsored by the Samueli School of Engineering and the Donald Bren School of Information and Computer Sciences seeks to support underrepresented students, keeping them interested and engaged in school and in their future careers.

At an intimate networking event in the Newkirk Alumni Center, students from both schools gathered Thursday evening, November 13, to meet with the industry professionals who have volunteered to mentor them.

The Undergraduate Mentorship Program was established last year by the ICS and Engineering Leadership Council’s Diversity Committee to recruit alumni, community members and industry professionals to support underrepresented students, specifically women, who historically have a higher attrition rate than their male counterparts. 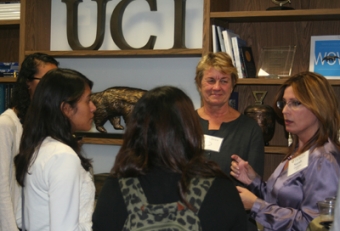 Four seniors in last year’s inaugural program were hired by their mentors’ companies, and several other students were offered internships. In an effort to build on this success, the program is expanding its focus to include not only women, but students from other underrepresented groups as well.

Biomedical engineering student Karilyn Cuthbertson is not a typical undergraduate; she married and started a family before deciding to further her education. At first, returning to school made Cuthbertson nervous, she says, but the program has helped her gain confidence.

“For me, the most valuable takeaway has been the opportunity to be brave, practice communicating with industry professionals, and ultimately warm up to meeting new people in a professional setting.” 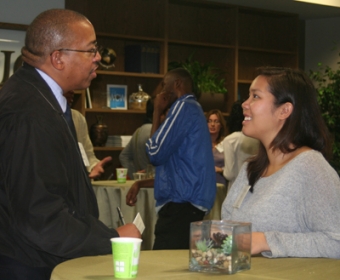 As Cuthbertson prepares to graduate in spring 2015, she appreciates the promising career opportunities the networking events provide and notes that she definitely recommends the program to other students.

In addition to mitigating attrition, the program in its second year is focused on encouraging students to begin searching for jobs early in their college experience.

“Each year that a student postpones his or her job search is a year that student could have interned, shadowed and networked with professionals in engaging, enjoyable and lucrative careers,” says Antigone Blackwell, director of development for the engineering and ICS schools.

She adds that often, the most promising career opportunities are housed in seemingly unconventional places. “Engineers and computer scientists are everywhere; hospitals, real estate, communications, banking finance, retail – the list goes on.”

The program benefits the mentors as well as the students they guide. Edmund Takashima, a UC Irvine alumnus who is a returning mentor from Boeing, is supporting two students this year to help accommodate the increase in participants. Takashima welcomes the change in pace that the program brings to his day, finding it invigorating to interact with and help guide future engineers. He also sees the program as a good opportunity for students to receive third-party feedback on their resumes and cover letters, along with individual guidance in their career preparation.

The Undergraduate Mentorship Program has grown considerably in just one year, increasing from 52 students and 41 mentors to 76 students and 56 mentors this year. More than 30 different companies and organizations are represented, including Blizzard, Skyworks Solutions, Inc. and Southern California Edison.

“I am extremely heartened by people in the community and our alumni who are so generous with their time,” says UCI’s Blackwell. “Seventy percent of the program’s mentors are UC Irvine alumni. The program offers our students such a powerful network of professionals who are eager to reach out and support them.”