Engineer Named Fellow of the National Academy of Inventors 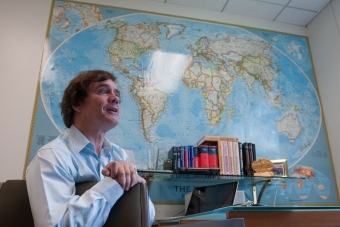 UC Irvine engineering professor Marc Madou has been named a Fellow of the National Academy of Inventors (NAI) for 2014. The distinction is awarded to academics who’ve demonstrated a prolific spirit of innovation in creating or facilitating outstanding inventions that have made a tangible impact on quality of life, economic development and the welfare of society.

A Chancellor’s Professor in mechanical engineering, Madou specializes in applying miniaturization science to solve chemical and biological problems, with an emphasis on on sensing, microfluidics, carbon nanotechnology and energy. His research includes medical diagnostics, sensor technology, micro-battery development and novel drug delivery systems. He is a leading expert in scalable nanomanufacturing technologies and has more than 100 issued patents and invention disclosures. His book Fundamentals of Microfabrication, now in its third edition, is one of the most widely read texts in micro-electro-mechanical systems (MEMS).

Madou has started five businesses, including Enevate, a company that makes advanced high-energy batteries for smartphones and other devices, and RotaPrep, a company that uses innovative technology to prepare life science research samples for academic, industrial and government studies. He spent more than a decade in the biotech industry before joining the Samueli School faculty. He is the author of eight books, 18 chapters and more than 330 journal and conference papers.

“It is rare to be recognized if one does not follow an established path,” says Madou. “I have always done things my own way… It feels good that someone might have noticed.”

Madou is among 14 University of California professors being named; he is the only one from UCI. The new fellows will be inducted during the Annual Conference of the National Academy of Inventors on March 20 at the California Institute of Technology in Pasadena.