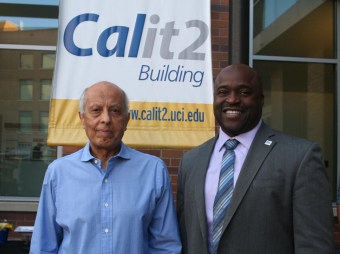 The Samueli School’s newest National Academy of Engineering (NAE) inductee is one of its longest serving faculty. Said Elghobashi became the 16th faculty member of UC Irvine’s School of Engineering in 1978 and has contributed significantly over the years to the development of the mechanical and aerospace engineering department. So it was with great pride and celebration for the school and Dean Gregory Washington to host a distinguished lecture in honor of Elghobashi.

Colleagues from across campus joined engineering students to hear Elghobashi’s talk, “Turbulence: from da Vinci’s Observations to the Present.” Elghobashi’s research over the decades has involved challenging and important areas of fluid dynamics: turbulent flows, multiphase flows and computational fluid dynamics (CFD). His leadership in each of these areas is well recognized, and his early work has impacted the standard commercial CFD computer codes in the field. His more recent work is setting future trends.

Elghobashi’s hour-long lecture touched upon da Vinci’s first recorded studies of turbulence as well as examples of turbulence research being conducted at UCI. He pointed out that while many mechanical and aerospace engineering professors are researching turbulence in relation to jet engine performance, “turbulence is everywhere, all the time; not only when the pilot says, ‘fasten your seatbelt!’” 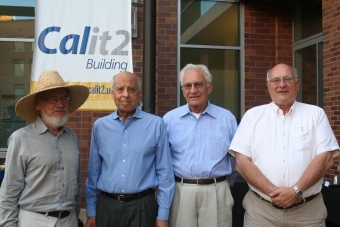 He explained the different features of turbulent flows, governing equations and numerical challenges that researchers face. Elghobashi offered real life examples that allowed the audience to better understand turbulence. To explain the distinction between laminar flow and turbulent flow, he used a golf ball.

“Laminar flow has no random, time-dependent eddies (three-dimensional patches of swirling fluid) of different sizes, while turbulent flow does,” explained Elghobashi. “The first golf ball was made of smooth wood in Scotland in 1550; however, around 1890 it was discovered that an old ball with a roughened surface traveled farther than a smooth ball. So in 1901 concave dimples were introduced, because when the ball is traveling through the air, the dimples cause flow transition from laminar to turbulent, thus reducing the drag force, and resulting in the golf ball traveling farther.”

Elghobashi’s election to the academy brings the number of NAE members to four in the department and 11 at the school.