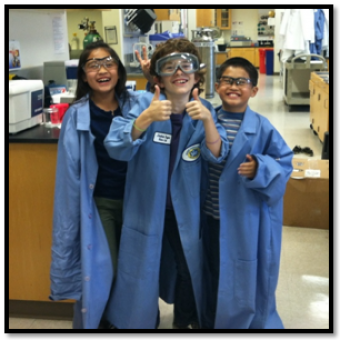 Michelle Khine is known for her playful approach to science. She used a toy – Shrinky Dinks – to invent a method of quickly and cheaply developing custom microfluidic chips for researchers to use in their labs. Now she and her student researchers are inventing toys to inspire kids to not only conduct science, but also become inventors themselves.

They came up with three ideas for educational toy kits that are “fun, creative, and chock-full of scientific content and ah-ha moments for any child at heart.” Khine and her students formed an academic nonprofit co-op called A Hundred Tiny Hands and have ran a Kickstarter campaign to raise $50,000 to produce the kits. Contributors to the Kickstarter campaign will receive the kits and other fun gifts in return (such as kid-sized lab coats), or they can donate to a school in need and have their donation matched with contributions from Tiny Hands.

Each kit’s packaging features a cartoon character based on the corresponding graduate student and includes a booklet using the character to help children learn the scientific concepts. The idea with the kits is to create a virtual community of young inventors. A Hundred Tiny Hands plans to hold fun challenges – who can build the biggest Polytropolis city with the maximum number of lit up buildings generated from a nine-volt battery? It also intends to encourage kids to upload their own invention ideas, and the graduate students will help them make and produce their own custom kits, including a cartoon character made from their likeness to star as the main character in the booklet and on the box.