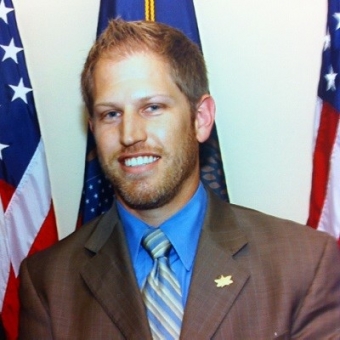 November, 2014 - UC Irvine engineering alumnus Jeremy Pearson has been selected as the 2015 American Nuclear Society (ANS) Glenn T. Seaborg Congressional Science and Engineering Fellow. Pearson, who earned his doctorate in chemical engineering this past year, will begin his fellowship in Washington, D.C., in January, working in the office of U.S. Sen. Orrin Hatch of Utah.

At UCI, Pearson worked closely with Director of Federal Relations Kathy Eiler, Samueli School Dean Gregory Washington and Vice Chancellor Wendell Brase on opportunities in D.C. and on inviting congressman to UCI to visit the nuclear reactor and other departments. He is one of the founding members of the UCI student section of the American Nuclear Society.

Pearson has been interested in policy since before he began his graduate research in the lab of Mikael Nilsson, associate professor in chemical engineering and materials science. His research was focused on the back end of the nuclear fuel cycle and nuclear fuel recycling.

“I have long felt that there is a lot to be gained from scientific perspective in Congress, especially that which can overcome political boundaries, elucidate common ground and stimulate collaboration. The nuclear field requires significant technical communication and transparency, both on the policy level and in local communities” says Pearson.

"This fellowship is a great extension of the work I have been doing here. It will provide me with an excellent opportunity to learn how our Congress and the process of drafting legislation and making policy work.”

After completing the one-year fellowship, Pearson hopes to work in an industrial research or national lab setting.

Pearson will become the 15th Congressional Fellow sponsored by the American Nuclear Society (ANS). Established in 1954, ANS is a professional organization of engineers and scientists devoted to the peaceful applications of nuclear science and technology.