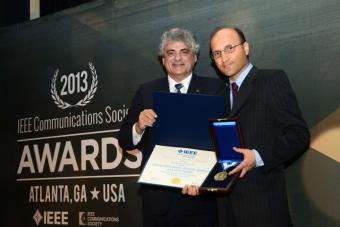 The IEEE presented UC Irvine Chancellor’s Professor Hamid Jafarkhani with the 2013 Eric E. Sumner Award at its Global Communications Conference in Atlanta in December. Jafarkhani is a co-recipient of the award, which recognizes researchers’ outstanding contributions to communications technology.

“It is an honor to receive such a prestigious award,” says Jafarkhani, professor of electrical engineering and computer science and director of the Center for Pervasive Communications and Computing.

The collective work of Jafarkhani and two colleagues has helped the wireless communications industry improve quality of service and increase network capacity and has been a key enabler for fourth generation OFDM/MIMO systems. The trio’s research has greatly influenced the standardization, commercialization and advancement of space-time codes. In particular the award citation called out Jafarkhani’s contributions to “block signaling for multiple antennas.”