Material that mimics calamari skin is invisible to infrared cameras 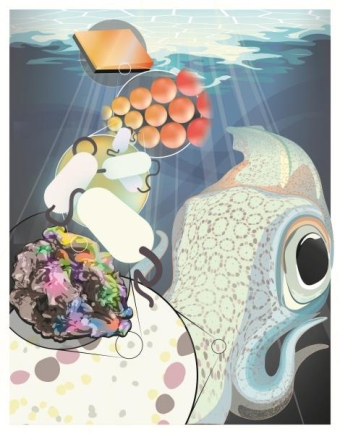 What can the U.S. military learn from a common squid? A lot about how to hide from enemies, according to researchers at UC Irvine’s Henry Samueli School of Engineering.

As detailed in a study published online in Advanced Materials, they have created a biomimetic infrared camouflage coating inspired by Loliginidae, also known as pencil squids or your everyday calamari.

Led by Alon Gorodetsky, an assistant professor of chemical engineering & materials science, the team produced reflectin – a structural protein essential in the squid’s ability to change color and reflect light – in common bacteria and used it to make thin, optically active films that mimic the skin of a squid.

With the appropriate chemical stimuli, the films’ coloration and reflectance can shift back and forth, giving them a dynamic configurability that allows the films to disappear and reappear when visualized with an infrared camera.

Infrared detection equipment is employed extensively by military forces for night vision, navigation, surveillance and targeting. The novelty of this coating lies in its functionality within the near-infrared region of the electromagnetic spectrum, roughly 700 to 1,200 nanometers, which matches the standard imaging range of most infrared visualization equipment. This region is not usually accessible to biologically derived reflective materials.

“Our approach is simple and compatible with a wide array of surfaces, potentially allowing many simple objects to acquire camouflage capabilities,” said Gorodetsky, whose work has possible applications in infrared stealth camouflage, energy-efficient reflective coatings and biologically inspired optics.

This is just the first step in developing a material that will self-reconfigure in response to an external signal, he added. The Samueli School researchers are currently formulating alternative, nonchemical strategies for triggering coloration changes in the reflectin coating.

“Our long-term goal is to create fabrics that can dynamically alter their texture and color to adapt to their environments,” Gorodetsky said. “Basically, we’re seeking to make shape-shifting clothing – the stuff of science fiction – a reality.”

Others on the UC Irvine team are Long Phan, David Ordinario, Emil Karshalev, Jonah-Micah Jocson and Anthony Burke. Ward Walkup of the California Institute of Technology also contributed to the study.