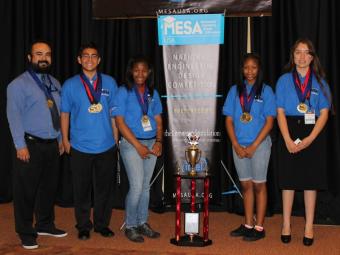 “More than anything else I think the MESA program demonstrates the great things these kids can accomplish when they are given access to resources and academic enrichment opportunities,” says Nicole Patterson, UCI MESA associate director. “To us these students are the face of the MESA Program, they are the mission fulfilled and it is an honor to be a part of their continued growth and development. We take great pride in their individual accomplishments and look forward to watching them realize their limitless potential.”

The win comes after months of designing, creating and competing to build the best prosthetic arm device. The Markham team beat hundreds of other middle school teams through preliminary, regional and statewide contests. They defeated teams from eight other participating states. The contest involved developing a prosthetic device that costs less than $40 to complete pre-defined tasks as well as giving an oral presentation, constructing an academic display and submitting a technical paper. 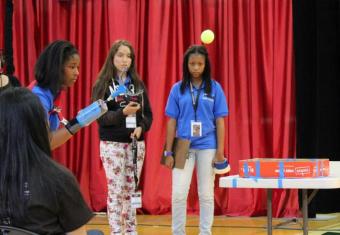 California MESA is an academic preparation program that serves more than 28,000 California pre-college, community college and university students who are educationally disadvantaged. California MESA is the model for similar MESA programs established in nine other states.

Markham is a Title I school with 80 percent of its students receiving free or reduced lunch. The school’s MESA program has existed for two years and this is the first time it has competed and won in the national competition. This is the fourth time in the last eight years a team affiliated with UCI’s program has earned the national championship.

The competition was part of MESA Day, an annual showcase of students’ math and science know-how. Through MESA and MESA Day competitions, students can explore future careers in science, engineering and other technical fields.