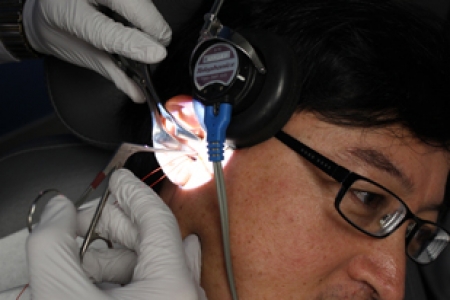 December, 2013 - Hearing aids, as those who wear them know, have some flaws. Whistling, echoing and feedback often frustrate even the most intrepid user. Biomedical engineering graduate student Peyton Paulick seeks to give those with hearing loss a better option, and if the first human clinical trial of her research device is any indication, she may well succeed.

The device, a small voice coil actuator placed deep within the ear canal, responds to an electronic signal by moving the eardrum mechanically – just the right amount – to allow sound waves to enter. This eliminates the problems that occur when sound waves are amplified, as in hearing aids.

“Satisfaction rates are pretty low,” Paulick said. “A lot of people with traditional hearing aids don’t use them.”

Additionally, of the more than 34 million hearing-impaired people in the United States, only 25 percent use hearing aids, leaving approximately 25 million patients untreated.

Paulick’s device is inserted – by a physician in an outpatient setting – deep enough within the ear canal to touch the eardrum. It uses a digital processing unit to convert sound to an electronic signal, which causes the device to vibrate at specific frequencies. The vibration moves the eardrum a predetermined distance, allowing the sound waves in and translating to a perceived sound by the patient.