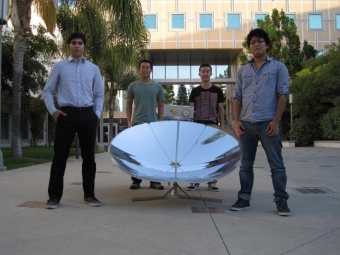 The Samueli School of Engineering at UC Irvine will receive a $100,000 Grand Challenges Explorations grant from the Bill & Melinda Gates Foundation for developing a solar stove that enables carbon emissions-free cooking.

The Grand Challenges Explorations initiative is intended to foster outside-the-box solutions to persistent global health and development issues. More than 80 grants were announced today by the Gates Foundation in the 11th round of funding.

The stored energy solar stove was initially designed by a group of senior mechanical engineering students at UC Irvine under the guidance of former research adviser John Garman. It permits carbon emissions-free cooking indoors and at night, which not only reduces deforestation, labor time and safety concerns for women who leave their villages to gather firewood, but also pollutes indoor air far less than the traditional in-home cooking methods currently employed in developing countries.

The students developed a working model that uses a solar collector to concentrate sunlight on an energy storage device, which consists of an insulated box filled with potassium nitrate and sodium nitrate. The salts are heated to their melting point by the solar radiation. Within three hours in the sun, the stove stores 0.5 kilowatt-hours of energy, which is released as the molten salt slowly resolidifies. This provides a stable heat source indoors or after sunset with a surface temperature well-suited to making foods such as bread and rice. The technology has gone through two design iterations and, with this grant, will be further refined by a new group of senior engineering students. 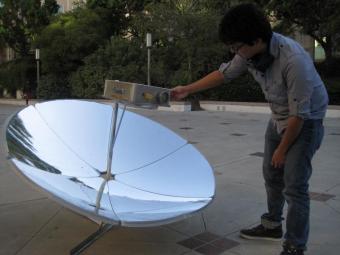 “What this grant money allows us to do is continue working on an effective thermal mechanical design to create a solution to an important global health and environmental degradation problem,” said Derek Dunn-Rankin, professor and chair of the Samueli School’s Department of Mechanical & Aerospace Engineering and principal investigator for the project.

Mechanical engineering student Lineker Phuong said that he and his collaborators have still got some work to do on the design. “We cooked up two batches of bacon easily, but by the third, the bacon didn’t fully cook,” he said. “The temperature of our cooking surface decreased gradually even while the temperature inside the box stayed constant throughout the cooking experiment.”