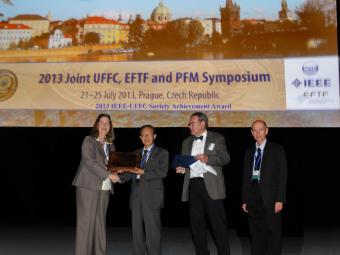 Chen Tsai grew up in a small village in Taiwan, where he and his older brother, without any tools, would fix things. He fondly remembers repairing the broken spring of an antique phonograph. He has turned his propensity to tinker into a formidable academic career, and it was with great pride that the UC Irvine’s Chancellor’s Professor accepted the 2013 lifetime achievement award from the IEEE-Ultrasonics, Ferroelectrics and Frequency Controls Society this past summer in Prague. The award, bestowed annually, is the highest honor given by the society for research achievement.

A professor of electrical engineering and computer science, Tsai was recognized for pioneering contributions in the “science and technology of integrated acousto-optics, ultrasonic monodisperse micro-droplet generation, acoustic microscopy, and guided-wave magneto-optics.” He was honored at the plenary session of the international joint conference of three affiliated societies, with some 3,000 attendees from many countries. Tsai proudly shared with conference attendees UCI’s recent top national and high worldwide rankings as well as some of the exciting new initiatives at the Samueli School of Engineering.

Tsai has dedicated 45 years to academic research, teaching and service, first at Carnegie-Mellon University, and the past 35 years at UCI. He has received many national and international awards and honors for his research achievements. At UCI, he has been recognized with campus awards and honors such as the Faculty Senate Distinguished Research Lectureship in 1995 and the Lauds and Laurels Award for Research in 1987.

Tsai is a demanding but caring research mentor as well as an enthusiastic teacher.  He was elected as the School of Engineering Instructor of the Year by the undergraduates in 1984, and the first EECS Department Hall of Fame Professor by the graduate students in 1989. Many of Tsai’s former students include academics as well as group leaders, managers, and principal technologists in industry. The 2011 UCI Distinguished Engineering Alumnus Awardee was Tsai’s former Ph.D. student who is currently a vice president in a local company.

“My students' successes have always brought me enormous personal satisfaction,” says Tsai. “I thank my former and current students, postdoctoral fellows, visiting scholars and professors for their research contributions; my mentors and colleagues for continued encouragement; and most of all to my wife, Shirley, for a lifetime of unconditional love and support.”

Tsai says his very first research idea came to him in the middle of the night in a dream. It was in 1969 and he was an assistant professor at Carnegie-Mellon University. “I woke up my wife in the middle of the night to tell her about my idea of a miniature optical device (the so-called wideband acousto-optic Bragg cell modulator), says Tsai. “That particular idea earned me my first NSF grant, and the patented device was subsequently used worldwide for making integrated optic-spectrum analyzer chips for real-time processing of wideband radio frequency signals in radar. ”